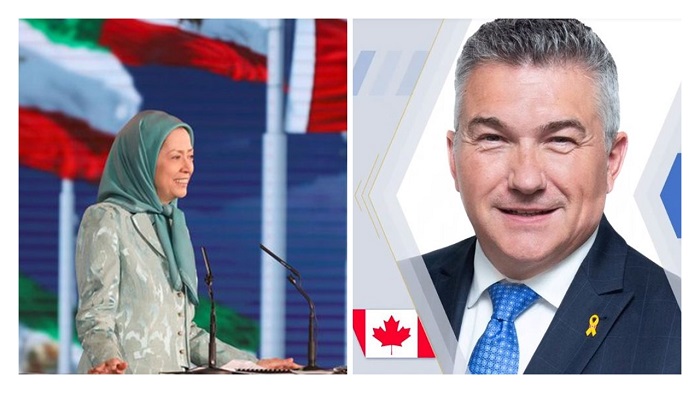 It’s an honor to participate in the Free Iran Global Summit, Iran rising up for freedom.  I want to acknowledge the bravery and tenacity of Iranian freedom fighters (MEK resistance unit across Iran) as they stand up against one of the world’s worst oppressive regimes, the Islamic Republic of Iran.

You have my full support, along with the tens of thousands of others, as you continue the fight for freedom, democracy, and human rights in Iran.

Now, many speakers before me spoke very eloquently about the challenges we face in the international community dealing with the rogue regime in Tehran. I know that Canada can and must do more to defend freedom and democracy in Iran and hold the Khamenei regime accountable for the blood it has on its hands.

I was horrified by the atrocities against innocent protestors in Iran and Iraq in November and December, and the lack of empathy or response from many governments. Canada failed to acknowledge the protests for almost two weeks after the protests began.

The Coronavirus pandemic came on the heels of the shooting down of flight PS752 and has caused much loss of life in Iran, including many Iranian Canadians.  I sympathize with all those affected by the virus and the shooting down of the flight.  Now, Covid-19 has also made evidence gathering in the downing of Ukrainian Airlines flight PS72 more challenging, but we must not allow the Iranian regime to use it as an excuse and to escape responsibility.

Now, Canada’s conservatives are calling for the following:  use Magnitsky Act sanctions to freeze the assets of high ranking regime officials responsible for shooting down that Ukrainian commercial passenger flight, list the IRGC as a terrorist organization, impose sanctions on high ranking Iranian officials for being the biggest state sponsors of global terrorism in the world, and finally, let’s slam the door shut on the question of renewing official diplomatic relations with the Iranian regime. Appeasement must stop.

Unfortunately, despite repeated calls over the years, the liberal government in Canada has failed to sanction a single member of the Iranian regime under the Sergei Magnitsky law, a law I sponsored in the House of Commons in 2017.  They’ve also failed to implement a bipartisan Parliamentary motion calling on the government to designate the IRGC as a terrorist entity which both conservative and liberal members of Parliament voted in favor of.

Holding to account and sanctioning the regime’s leadership is necessary not only for the shooting down of Flight PS752 but it’s for the mullah’s ongoing state sponsorship of global terrorism.  Destabilizing the political and security sphere in the Middle East, and it includes the 1988 massacre of political dissidents and religious and ethnic minorities, which included Kurds, Christians, Jews, Baha’i, but overwhelmingly, they targeted and slaughtered tens of thousands of innocent members of the People’s Mujahedin Organization, (PMOI / MEK Iran).

Ali Khamenei, President Rouhani, and the regime’s ministers of the cabinet must be held responsible for their crimes against humanity.

In closing, I want to thank Madame Rajavi, (Mrs. Maryam Rajavi is the President-elect of the National Council of Resistance of Iran) whom I had the pleasure of meeting several years ago.  Your tireless efforts and your Ten Point Plan to bring independence, democracy, freedom, and human rights to Iran should inspire each and every one of us.

It is indeed in Canada’s interest and the world’s to see a free Iran in our generation.  We stand shoulder to shoulder with you as you carry on the relentless battle to save Iran for the people of Iran and snatch it back from the grasp of the blood-soaked tyrants who have held it hostage for far, far too long.

I add my voice to hundreds of my colleagues here and from around the world to do just that.

Thank you and God bless.