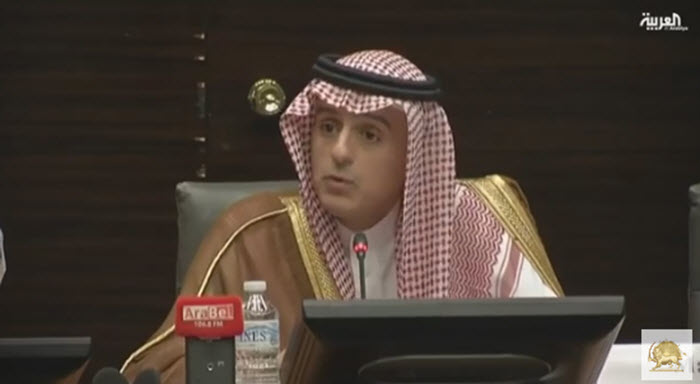 The National Council of Resistance of Iran (NCRI) has published an article on their website regarding the remarks of Saudi Arabia’s Foreign Minister Adel Al-Jubeir who responded to a statement from the Iranian regime’s General Consul. He spoke at an event about terrorism organized by the Belgian Ministry of Foreign Affairs in Brussels on 21st July and “pointed out the role of the mullahs’ regime in acts of international terrorism”.

Parts of his speech were aired by Al-Arabiya (and reproduced on the NCRI website).

He said: “The Honourable Consul from Iran did not say anything that is based in fact. (…) Didn’t Iran create Hezbollah? Didn’t Iran attack more than a dozen embassies in Iran in violation of all international laws? We didn’t attack them. Iran did.”

He pointed out that Iran planned and carried out the 1996 Khobar Towers attack against the American marines. He said the control officer was Brigadier-General Sharifi, the regime’s military attaché in Bahrain. The bomb maker was Hezbollah, he added, and the explosives came from the Bekaa Valley. “The top three leaders of the plot escaped and have been living in Iran ever since. Isn’t that sheltering terrorists?” he asked. “One of them was captured last year in Lebanon with an Iranian passport, not a Saudi passport, even though he’s a Saudi citizen. Isn’t that aiding and abetting terrorists? We didn’t make this up.”

He also said that the order to blow up three housing compounds in Riyadh in 2003 was made by Al Qaeda’s chief of operations during his time in Iran, and the phone conversation that was recorded is proof.

Al-Jubeir said: “Ronald Reagan used to say that facts are stubborn things. You can’t get around the fact that Hezbollah is a terrorist organisation. Attacking embassies is very clear – they don’t just blow themselves up. Somebody does it. Diplomats don’t commit suicide by shooting themselves three times. Somebody is responsible. Iranian agents have been linked to terrorist attacks in Europe and South America. We didn’t make this up. This is the world. This is evidence.”

He called the behaviour of the regime “aggressive” and “unacceptable”. It is behaviour, he said, that violates international norms and international law.

He said that if the regime wants a Saudi official to stop being critical of Iran, they should stop behaving in a way that exposes them to criticism.