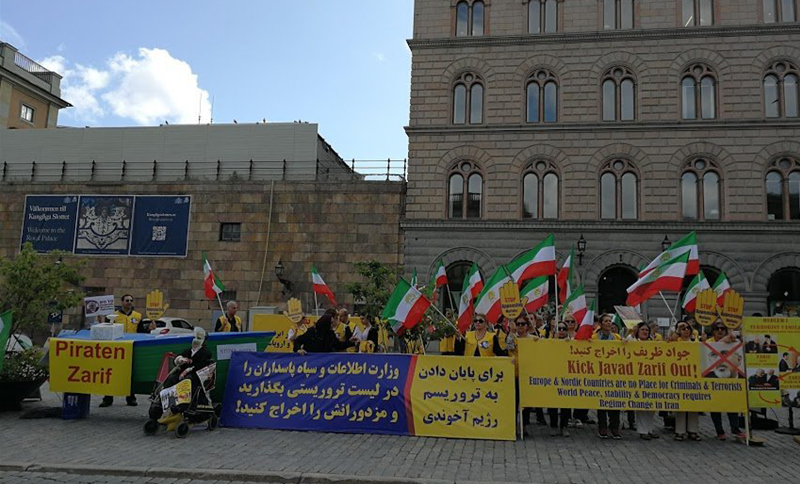 On Wednesday, Finnish supporters of the Iranian opposition group, the People’s Mojahedin Organization of Iran (PMOI/MEK), held a massive protest over the visit of the Iranian regime’s foreign minister Mohammad Javad Zarif.

Zarif, who is sanctioned by the US, is now begging Europe to help Iran escape the US pressure from unrelenting economic sanctions on everything from Iranian oil exports to the office of the Supreme Leader Ali Khamenei.

The protestors held up placards and signs that read:

• “We condemn any negotiations with the terrorist regime of Iran”.

They also had pictures of Maryam Rajavi, President-elect of the National Council of Resistance of Iran (NCRI), which is the coalition of democratic resistance groups that the MEK is a member of, and Massoud Rajavi, the leader of the Iranian resistance.

The protesters also chanted slogans, including:

• “Down with the absolute rule of clergy”

• “Iranians chant: down with Khamenei down with Rouhani”, which refers to Hassan Rouhani, the President of Iran

They also expressed their support for the Iranian Resistance and ongoing nationwide uprising in Iran.

This was similar to the protest held by freedom-loving Iranians in Gothenburg, Sweden on Saturday, August 17, also expressing their anger at Zarif’s trip to Scandinavia. There, protesters also held pictures of the Rajavis and signs with slogans, as well as the true Iranian flag, the Lion and Sun, as opposed to the one that the Iranian Regime flies.

• “The Iranian people are seeking to topple the mullahs’ regime

• “Javad Zarif, the diplomat-terrorist of Iran’s regime, should be expelled”

• “Support the Iranian people to overthrow the mullahs’ terrorist dictatorship”

The Resistance supporters wanted to make clear that the European countries and the West as a whole, should be supporting the Iranian Resistance with its 10-point plan for a Free Iran, which includes gender equality and a non-nuclear Iran, rather than the mullahs who seek power by any means.

On Monday, Zarif met with the President and Foreign Minister of Finland in Helsinki, before doing a joint press conference with his Finnish counterpart.

He will meet officials in Norway on Thursday, and in France on Friday. In France, he is expected to meet with President Emmanuel Macron before the G7 summit.