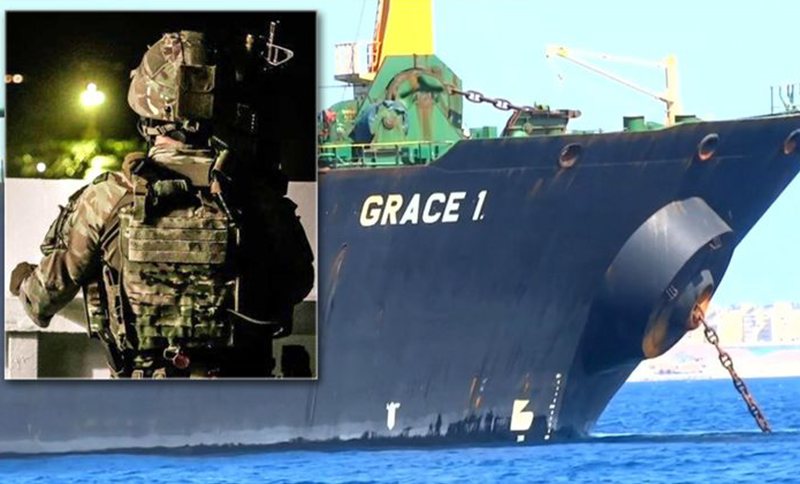 A tanker carrying Iranian oil was seized in the Strait of Gibraltar by British Marines in the early hours of Thursday, in an incident that demonstrates both the Iranian regime’s commitment to defying US-led sanctions and the likely effectiveness of Western measures for enforcing them. It was reported that the ship in question, the Grace 1, had aroused suspicions by turning off its transponder in an effort to hide a portion of its route, but was nonetheless spotted on satellite imagery at an Iranian oil port. From there, it took a circuitous route around Africa in order to reach the Mediterranean, where it was apparently destined for Syria.

British authorities determined that the tanker crew was planning to deliver its oil to a Syrian refinery that is subject to European Union sanctions on the regime of Bashar al-Assad. This no doubt provided additional incentive for the seizure, even though it was widely assumed that Britain was acting upon a request from the United States when carrying it out. Iranian oil exports are not under direct sanction from Britain or the EU at the moment, but the US re-imposed its own sanctions on the commodity late last year after withdrawing from the 2015 Iran nuclear deal.

In May, the White House stopped providing waivers to major importers of Iranian oil, thereby moving further in the direction of “maximum pressure” on the Islamic Republic. By penalizing all countries that continue to make the relevant purchases, Washington has assured that the Iranian oil industry must rely solely on business from institutions that have no dealings with the US financial system, or else conduct the transactions illicitly in order to hide their source. This is what the Grace 1 attempted to do, unsuccessfully. And many experts have previously highlighted the increasingly sophisticated ways in which international trade monitors can uncover attempts at deception.

Awareness of those mechanisms has arguably been amplified now that the Grace 1 incident stands out as a concrete example. And this in turn lends support to statements by the White House and its supporters which indicate that the past year’s sanctions have been having their intended effect and will continue to do so. Last week, Secretary of State Mike Pompeo and Treasury Secretary Steven Mnuchin each indicated that the Iranian economy had been sanctioned to “80 percent” and that the US would continue to push toward 100 percent unless the Islamic Republic changed its behavior. Mnuchin added that humanitarian provisions would also remain in place to ensure that the effects of those sanctions would primarily affect the clerical regime and not the people of Iran.

At the start of the same remarks, the Treasury Secretary argued that the growing success of economic sanctions was reflected in the angry response of Iranian officials to the latest measures, which targeted Supreme Leader Ali Khamenei and eight officers in the Islamic Revolutionary Guard Corps. This same logic could just as easily be applied to the regime’s reaction to Thursday’s tanker seizure. The British ambassador to Iran was summoned to answer for the incident, which Tehran described as illegal. Of course, this claim is seemingly undermined by the elaborate measures undertaken by the ship’s crew, which suggest keen awareness of the potential for sanctions enforcement by either the EU or the US.

If similar efforts at deception prove unsuccessful in a large proportion of Iran’s attempts to sell its oil abroad, it may ultimately have an impact on the regime’s promises of “resistance” to US pressure. These promises have been voiced by a wide range of officials, including Supreme Leader Khamenei, and they have arguably grown louder in the wake of Iran’s violation of the terms of the nuclear deal.

Although the US pulled out of that deal in May 2018, the remaining six signatories expressed ongoing commitment to it, up until the point at which Iran issued an ultimatum to its European partners. Britain, France, and Germany were given until last week to provide Tehran with adequate safeguards against the effects of US sanctions. This would have primarily entailed operationalizing the Instex payment mechanism that was set up earlier this year for transactions between European and Iranian entities. But the three European nations proved either unwilling or unable to follow through with this, perhaps because the overwhelming majority of international businesses are willfully complying with the sanctions and perhaps because Iran itself has refused to adopt anti-money laundering standards required by all countries that utilize international payment systems.

In any event, Iran initially delayed violating the nuclear deal but finally confirmed on Monday that it had done so by exceeding the defined limits on stockpiles of nuclear material. The regime now promises that by the end of the weekend it will also exceed limits on the level of purity attained by its uranium enrichment activities. President Hassan Rouhani, traditionally referred to as a relative moderate among Iran’s mullahs, even went as far as to say that the regime would enrich to “any amount we want” and would consider re-opening the Arak heavy water plant that could provide Iran with a plutonium pathway to a nuclear weapon.

US President Donald Trump highlighted these supposed plans on Twitter and addressed a response to the nation’s leadership, saying, “Be careful with the threats, Iran. They can come back to bite you like nobody has been bitten before!” This statement was reminiscent of a number of other threats that Trump has issued in response to perceived aggression from the Islamic Republic. Yet at the same time, he has repeatedly insisted that it is his administration’s intention to avoid war and that he was open to negotiations without precondition.

For their part, Iranian officials have generally rejected all offers to that effect. At times, this rhetoric has been supplemented by statements suggesting readiness for war on the part of Iranian forces. On Wednesday, Revolutionary Guard commander Hossein Salami publicly argued that America’s focus on economic and diplomatic pressure was the result of a situation in which the IRGC had “completely close the path [of war] for the enemy.”

Last month, after the IRGC shot down an American drone over the Strait of Hormuz, Trump ordered military strikes in retaliation but then called them off at the last moment, noting that the estimated 150 Iranian casualties would be a disproportionate response to the downing of an unmanned aircraft. Immediately after that announcement, though, White House officials cautioned the Islamic Republic against “mistaking restraint for weakness.”

That apparent restraint has been justified by the argument that sanctions are proving sufficiently effective on their own, and Thursday’s tanker seizure may support that argument. Furthermore, it appears to coincide with the slight moderation of Iran’s rhetoric within some circles. On Thursday, the nation’s Intelligence Minister Mahmoud Alavi noted that negotiations could be forthcoming, provided that the supreme leader offered his blessing. This had naturally been a prerequisite for the negotiations that led to the 2015 nuclear deal, as well, and Khamenei reportedly signed off on those talks and the resulting agreement only begrudgingly, under pressure from the effects of international sanctions.

But despite publicly referencing the potential for negotiations, Alavi and President Rouhani each continue to insist, at least for now, that they would only take place if the US and its partners committed to reversing the pressures that have been put in place over the past year. There is, of course, no sign that the Trump administration has any interest in doing so, and the British Marines’ actions on Thursday stand as one of several signs that European nations are losing patience with Iran’s provocations.

As pressure on the Islamic Republic becomes both more intense and more coordinated, the world may yet begin to see further downturns in the rhetoric emanating from Tehran. But even if the regime’s leadership does not embrace the concept of negotiations, it is unlikely that the growing pressures will leave Tehran with much leverage to utilize in presenting the EU or the US with ultimatums concerning oil sales, nuclear enrichment, or any other activities.