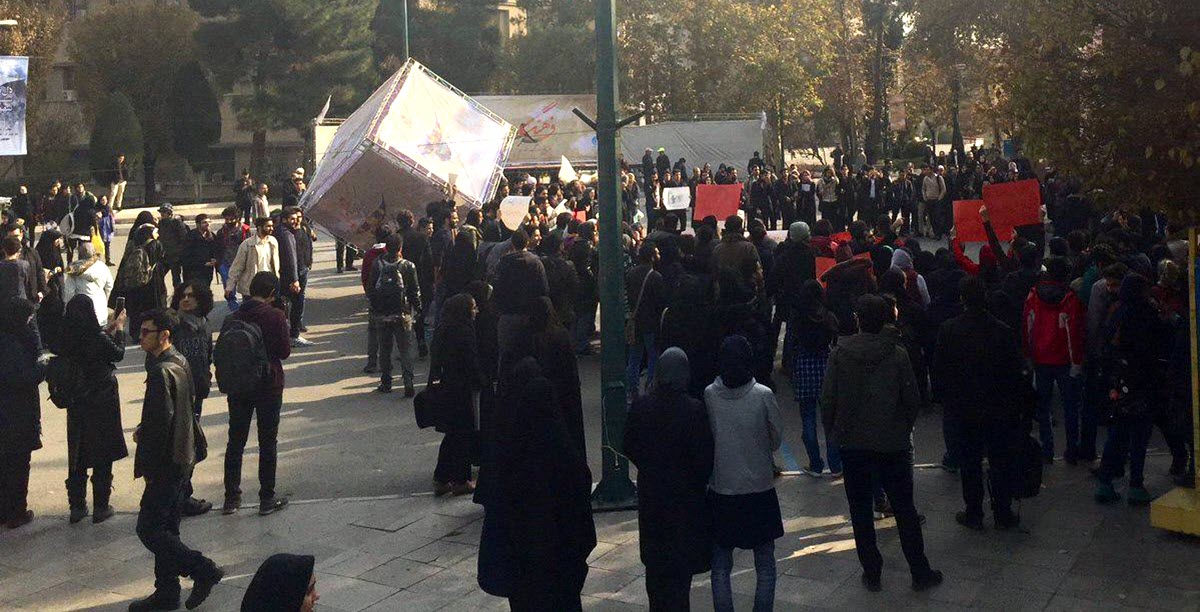 On Monday, what began at Tehran University, Beheshti, Kharazmi, and Allameh Tabatabaei Universities in the capital, had by Tuesday, and expanded to several other institutions. Hundreds of students at each university have gathered for the second day in a row.

After the protests in 2009, when students raised their voices in a chorus against the victory of Mahmoud Ahmadinejad in the presidential election, harassment of politically active students is alleged to continue by security forces. Student publications are said to be banned or censored, and students have been suspended or discharged from the university.

Although President Hassan Rouhani had criticized the increasing pressure on students and promised to improve the situation during his election campaign, students complain that the president has not fulfilled his promise as yet.

Students participating in the demonstration at Tehran University on Monday criticized the government for what they call a “monetization of universities and capitalization of social life” and demanded free education. Additionally, they accused the ministry of science of conducting “business” and chanted “the loans have made us slaves of the banks.”

While public universities generally have free tuition, students who are admitted to night courses must pay for their education. Tuition has undergone significant increases in recent years. As well, universities have begun to charge for other such things as dropped courses.

Last August, state-run Mehr News Agency posted a bulletin regarding 36 universities in the country, saying that women had been excluded from 77 fields of study. The reported restrictions aroused Shirin Ebadi, the Iranian human rights lawyer and Nobel laureate exiled in Britain, to write a letter to Ban Ki-Moon, the UN secretary-general, and Navi Pillay, the UN high commissioner for human rights, condemning the measure as “part of the recent policy of the Islamic Republic, which tries to return women to the private domain inside the home as it cannot tolerate their passionate presence in the public arena.”

Students at Qom university, 120 km south of Tehran protested gender segregation at a ceremony commemorating the Students Day on Tuesday, and walked out of the venue chanting “students die, but do not accept discrimination.”

December 7th is designated as Students Day by the Iranian government. It commemorates the death of three students who were killed in a protest in1953, over a visit to Tehran by the then U.S. Vice President Richard Nixon.