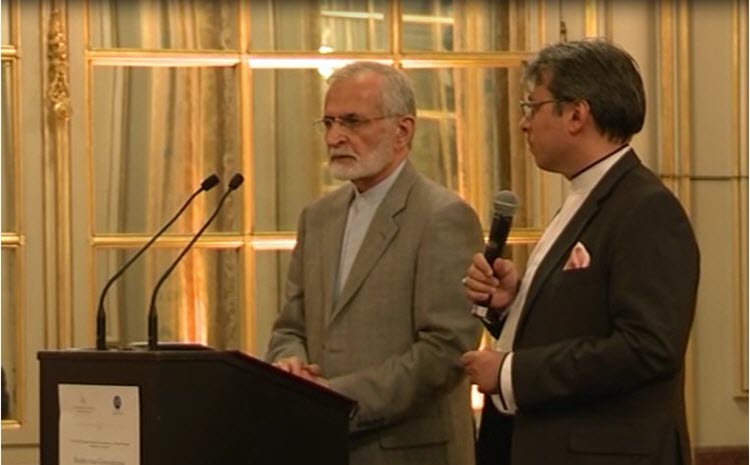 The annual “Free Iran” rally hosted by the Iranian Resistance in Villepinte, in the suburbs of Paris, took place three weeks ago.

Since then, the regime has been upset over the massive reception this event garnered, both inside the country and on the international scene.

Meanwhile, the Justice-Seeking Movement has been calling for retribution for the victims of the 1988 massacre of political prisoners, and the regime has been criticized for its crimes against the countries in the Middle East.

Amid all of this, Khamenei, Iran’s Supreme Leader, in an attempt to counter the increasing domestic and international prestige of the People’s Mojahedin Organization of Iran (PMOI/MEK), sent Kamal Kharrazi, his relative and adviser, to Paris to where he called the MEK “a terrorist group that murdered thousands of ordinary citizens in Iran.”

Kharrazi’s visit to Paris followed the visit of the regime’s Foreign Minister, Javad Zarif, on June 29th and 30th. Zarif attempted to ban the annual July 1st meeting of the Resistance, but he failed.

Zarif said, when he returned to Tehran,”in our discussions with the French authorities, we have raised this issue as a point of ambiguity in our relations.”

The Secretariat of the National Council of Resistance of Iran published these points in an article on July 25, 2017:

1. The Iranian Resistance campaign for the inclusion of the Islamic Revolutionary Guard Corps (IRGC) in the lists of terrorist organizations is doubly disturbing to the mullahs’ theocracy being in further need of such attempts. According to reports obtained from inside the regime, the Supreme National Security Council of the mullahs discussed, in the presence of the Foreign and Intelligence Ministers (MOIS), new schemes to fabricate new files against MEK and handing them over to the French judiciary. To this end, it was decided, for example, to attract French authorities to Tehran to impress them through staged shows already used against MEK.

2. Kamal Kharrazi, former Foreign Minister of the regime, who came to Paris for the same purpose, is the very criminal who, with the complicity of his nephew, Sadegh Kharrazi, then ambassador of the mullahs in Paris, was deeply involved in the shameful conspiracy against MEK and the Resistance that led to the June 17, 2003 dossier. However, this case ended in a bitter failure and disgrace for the regime and its French accomplices, adding considerably to the prestige of the Resistance, and the French Justice closed this file after several years of investigation without prosecuting even one person. Thirteen years ago, in July 2004, referring to the mullahs’ regime’s fabrications against the MEK, the French Magistrates’ Union disclosed “the submission of the Anti-Terrorism Prosecutor’s office in Paris” to the demands of the mullahs’ regime. Similarly, the League of Human Rights demanded the closure of this empty dossier from the beginning.

3. The ridiculous conspiracies of the Iranian regime aimed at maintaining a psychological war against the Iranian Resistance continued in the following years with the fabrication of files and the filing of “complaints”. An example of this is the revelation made on 30 September 2005 by Emmanuel Ludot, a French member of the group of lawyers of the former Iraqi president, who asserts in an interview with the ARTE channel that the ambassador of the Iranian regime in Paris (Sadegh Kharrazi) proposed that the Iranian and Iraqi regimes put an end to their reciprocal accusations on the responsibility for the chemical attack on Halabja, and attribute this act to the MEK. A few months later, the group of lawyers of the former Iraqi president said that the mullahs’ regime proposed to pay $ 100 million for this plot to be accomplished with success (the Asharq al-Awsat daily, February 26, 2006).

4. Thus, the mullahs’ unstable regime, which is unable to tolerate and extremely afraid of a rally of Iranians 5000 km away from Iran, and while it feels threat form the growth of domestic and international appeals to bring to justice those responsible for the massacre of 30,000 political prisoners, it tries again to cling to the French government and the Justice apparatus of this country in order to replace the executioner and the victim. It was within the framework of this plan that the regime dispatched the executant in charge of the 17 June 2003 dossier to France. However, the Iranian people and the Iranian Resistance will not allow the religious fascism ruling Iran – which is in its final phase – to continue its machinations.

5. In a report dated 22 July 2017, the Tasnim news agency, linked to the terrorist Quds force of the IRGC, cites Kamal Kharrazi – addressing an audience of only about 20 people in Paris, presented as a lecture in a room of the “Academy of International Sciences” – stating: “Today, countries such as the United States, Saudi Arabia, Israel and France are supporting and instrumentalizing the terrorist group of the People’s Mojahedin who have murdered thousands of ordinary citizens in Iran.” He added with senseless words that, “Delisting of this group from their lists of terrorist organizations shows that the issue of terrorist groups has become a political affair, by which different countries put them on their lists or withdraw them according to their interests.”

6. While dozens of courts in the United States, the European Union, the United Kingdom, France, etc. have issued their verdicts on the unfounded nature of the allegations of the regime, the repetition of these nonsense issues about the MEK can only reflect the total bankruptcy of the regime of Tehran. In the order of prohibition of prosecution issued on the file of 17 June 2003, the French Justice states: “The NCRI, MEK and NLA are one and the same collective enterprise with the aim of overthrowing the regime ruling Iran, and based on “ judicial investigations” the various means used to fulfill this goal, “ they are either political (propaganda, awareness-raising, lobbying, search for various supports)” or “via a real army, NLA,” and “ or “ they consist of military operations in Iran claimed by the MEK” and “The record does not contain evidence of any armed action deliberately targeting the civilian population “. The order also specifies that the file data “does not permit that military offensive be considered as identical with terrorist acts. A military offensive leading to an armed combat between armed parties cannot be assumed as terrorism under French law.”

7. Given that, following the French court’s dismissal of the case of 17 June and delisting of the MEK, no excuse is left for the regime, in a yet another ridiculous allegation, Kharrazi has accused the MEK of the assassination of the regime’s “nuclear scientists”, an accusation that even the regime’s authorities could never take seriously, officially accusing others of being responsible for the killings.

8. Zarif, Kharrazi and other agents and mercenaries of religious fascism in power in Iran, with their open or hidden face, also pursue another objective by repeating these lies: divert attentions from the serious threat posed by the mullahs’ regime and its terrorist bands and its ISIS type by-products. This is because today the international community is becoming increasingly aware that the Velayat-e Faqih regime in Iran and the ensuing fundamentalist ideology and terrorism constitute the main threat to peace, stability and democracy throughout the world; ISIS and Al-Qaeda being only by-products of this system. Various governmental authorities, intelligence agencies and credible international media have repeatedly disclosed the complicity between the mullahs’ regime and Al-Qaeda or ISIS. The final statement of the Riyadh conference, in which many heads of state and representatives of Muslim countries and the United States participated, emphasized “the total rejection of the actions of the Iranian regime, which is detrimental to the security and stability of the region and the world, as well as the continued support of this regime to terrorism and fundamentalism.” Eminent European, American and Arab figures reaffirmed and confirmed this reality during the Grand Gathering of the Iranian Resistance in Villepinte on 1 July 2017. Referring to the fact that ISIS is about to be expelled from its Syrian “capital” of Raqqa, Senator Joseph Lieberman stressed “Raqqa has never been the capital of Islamic extremism and terrorism. It was Tehran, under this extremist regime since 1979, the true capital of extremism and Islamist terrorism and that is why this regime should go away. “

9. Attempts to attract the French authorities to Tehran to witness the staging of the regime, is a method already practiced by the regime with authorities of several other countries. For example, on February 27, 2017, the Ministry of Intelligence of the mullahs (MOIS) took the President of the Albanian Press Agency (ATA) to meet with so-called “families of victims of terrorism” and “remnants of terrorist explosions” falsely attributed to the MEK or a” museum of martyrs of terrorism “, specially designed for this kind of guided tours.

10. On July 5th, several ambassadors from foreign countries in Tehran were taken to the sinister Evin Prison prepared for the occasion by a staging intended to mask the traces of torture, execution or mass murder of prisoners. In this regard, Amnesty International said in a statement on July13: “The highly publicized visit to Evin prison was clearly a PR stunt orchestrated by the Iranian authorities to cover up the dark truth about the prison… Unsurprisingly many areas of the prison remained off limits to the foreign delegates. They were only granted access to a handful of sections in buildings 4 and 7, mostly housing wealthier prisoners convicted of financial crimes… Yet foreign delegates were not allowed to visit areas of the prison that hold dozens of prisoners of conscience including human rights activists… The delegation was also barred from accessing areas controlled by the Ministry of Intelligence and Revolutionary Guards, where detainees are routinely subjected to torture and other ill-treatment.”

11. The mullahs’ regime uses such lies and machinations when it has 120,000 political executions, more than 500,000 political prisoners tortured, and is condemned 63 times by UN bodies for its systematic and barbaric violations of human rights. Hassan Rouhani, the president of the mullahs’ regime, admitted on May 8, 2017 that this regime ruled the country for 38 years by resorting to executions and imprisonment. On July 14, 1980, a year before the start of resistance against the regime, Hassan Rouhani had suggested in a public session of parliament “to hang [opponents] during Friday prayers before the crowd, so the impact would be stronger.” Hossein-Ali Montazeri, Khomeini’s designated successor, declared during the episode of the massacre of political prisoners in August 1988: “People are getting disgusted with the system of the Velayat-e Faqih.”

12.Having repeatedly stated, the Iranian Resistance once again calls on the leaders of this regime to be held accountable for their crimes committed during the past 38 years, including the massacre of 30,000 political prisoners in 1988, before an international criminal court, in the presence of the Iranian Resistance and thousands of witnesses of these crimes inside and outside Iran. Previously, the late Lord Slynn, former President of the European Court of Justice and former High Judge of the Court of Appeal of the United Kingdom, had formally requested on behalf of the Iranian Resistance the International Humanitarian Fact-Finding Commission – IHFFC to shed light on the crimes of this regime in Iran and Iraq, and its allegations against the Iranian Resistance. However, the Tehran regime never answered the Commission’s questions, nor did it answer the calls for truth and justice.

Having previously issued warnings about machinations and conspiracies of the regime against the Iranian people and the Resistance, the Iranian Resistance calls on the French government and the French judiciary to be vigilant and stay firm and not be manipulated by Iran.