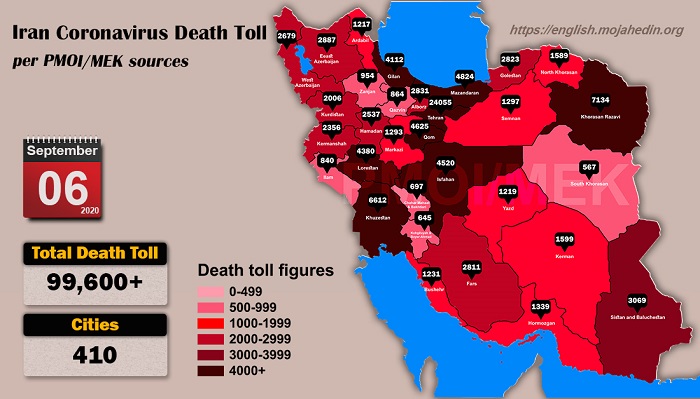 The Iranian regime is more focused on self-preservation than taking the necessary measures to manage the Covid-19 crisis. The regime may now have acknowledged that coronavirus is present in Iran but it continues to downplay the severity of the spread of infection. The People’s Mojahedin Organization of Iran (PMOI / MEK Iran) announced on September 6, 2020, that Coronavirus has taken the lives of more than 99,600 in 410 cities across Iran.

More than 99,600 people have died of the novel #coronavirus in 410 cities checkered across all of #Iran's 31 provinces, according to the Iranian opposition PMOI/MEK. pic.twitter.com/u24eXmKeKf

The Iranian Resistance has consistently warned of the regime’s deception over the real Covid-19 status of Iran. Following the Iranian official’s first public statement on coronavirus, President-elect of the National Council of Resistance of Iran (NCRI), Maryam Rajavi, called for the World Health Organization to send experts to Iran who could formally assess and respond to the seriousness of the epidemic.

There have been major contradictions in the statements coming from the Ministry of Health in Iran and the factual evidence there has been from multiple sources. During the peak of the outbreak in late February, the regime insisted that the total death toll of the nation was just over a dozen people. However, in the city of Qom alone, local reports showed that already so many people have died from coronavirus that some morgues had exceeded their capacity.

.@Maryam_Rajavi at ceremony for 56th anniversary of founding of People’s Mojahedin Organization of #Iran: People’s desire: the regime’s overthrow
Today, Iran is plagued with poverty, repression and the coronavirus pandemic. Socio-economic gaps have never been wider.#FreeIran2020 pic.twitter.com/ghEhoXhpeM

Local officials were soon aware that the real numbers were being concealed in the state media, who were complicit in covering up hundreds of deaths in the first few weeks. The regime’s Health Ministry silently revised its original estimates for fear of backlash. These revisions were still not in line with the true figures and this continues to be the case. The regime wishes to appear as though it is handling the Covid-19 crisis with ease to the international community and yet the situation only further deteriorates by the reality of its negligence. Some Western media outlets report the regime’s official infection and death rates as being factual which only further supports the regime’s ability to choose public image over the health of the Iranian people.

Official statements from the Health Ministry currently state that the coronavirus death toll is between 21,000 and 22,000 people as opposed to the (PMOI / MEK Iran) reports which show that the real death toll is nearly 100,000 people, almost five times the number claimed by the regime. The reports by the Iranian resistance are supported by hospital records and eyewitness testimony from Iranian medical professionals. Before the regime had even publicly acknowledged Covid-19 in Iran, the (PMOI / MEK Iran) had exposed documents to the public, revealing records from the National Emergency Organization which uncovered that coronavirus was indeed spreading throughout Iran.

In the beginning of the new school year, I salute the students who were the vanguards and led the protests and uprisings. Hail to the honorable and freedom loving teachers who held nationwide strikes against the regime over the past two years #IranProtestshttps://t.co/ROAEwif2nK pic.twitter.com/zQdqv5dTVK

It appears as though the regime disregarded early cases of coronavirus in Iran in order to start its official figures, when it finally acknowledged the presence of Covid-19, in single digits. The (PMOI / MEK Iran)’s investigations showed that suspected cases of coronavirus were admitted into Iranian hospitals in late January. However, a later leak was directly given to the press by a former member of the Health Ministry’s National Coronavirus Combat Task Force, after regime infighting, revealed that cases had been registered in hospitals a month earlier in December.

These disparities could potentially be even greater, given that we don’t know how much contact there was between the population and those infected with Covid-19 during the period of Tehran’s denial. The disregard for public safety during these months is demonstrated by the celebration of the anniversary of the regime seizing power over Iran, which came shortly before the first public statement by the regime on 19 February 2020. The Iranian people were encouraged to publicly congregate and participate in mass celebrations during this dangerous time.

Further to this, on 20 February 2020, the regime conducted its bogus parliamentary elections. Participation in the elections was regarded as a “religious duty” by Supreme Leader Ali Khamenei, however, there were no measures put in place to ensure public safety from Covid-19. This disregard for the regime’s duty of care to the people can be seen in the following weeks, where social distancing protocols were introduced at the slowest rate and economic activities were prematurely resumed. Khamenei has declared that 2020 should be the “year of boosting production” despite the nation being devasted by the coronavirus pandemic.

The regime continues its endeavors to appear as though it is skillfully managing the Covid-19 crisis and in doing so has made false promises to the people of Iran. The regime’s president, Hassan Rouhani went so far as to assert that life would be “returned to normal” by the end of February. This was just shortly after the regime had even acknowledged the existence of coronavirus in Iran. The false promises persist with the projected end date of the pandemic being pushed further back.

The false reporting and empty promises are demonstrative of Tehran’s dishonest approach to the Iranian people and the international community. The (PMOI / MEK Iran) has continuously released widely corroborated statements from a multitude of sources on the true nature of the pandemic in Iran and yet many western media outlets carry on repeating the clearly debunked official infection and death rates of the Iranian regime. The Iranian regime should not be allowed to appear as though it is capable of ensuring the safety of the Iranian people to the international community when the reality is entirely opposite.

Mojgan Kavousi and Sakineh Parvaneh deprived themselves of food to protest the authorities’ refusal to grant leave to political prisoners during the coronavirus pandemic.#Iran#HumanRightshttps://t.co/bZTWsyqknf