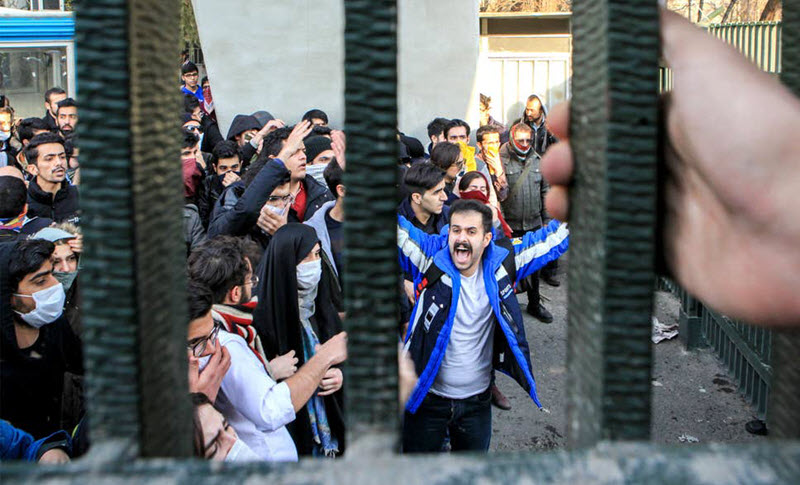 The Iranian regime is at a dead-end. It has no possibility of staying in power as the current situation stands. It is under immense pressure domestically because the people of Iran will not relent in their calls for regime change.

The situation in Iran, for the people, has been becoming increasingly unbearable because the regime’s response to the widespread discontent is to crack down on the people even more. Human rights are disrespected and people risk arrest, imprisonment, torture and even execution for speaking out against the regime. However, cracking down on the people even more is not going to make the people lose any desire for regime collapse – it just strengthens their position.

International pressure, mainly from the United States, is also limiting the regime’s options. The Trump administration is subjecting Iran to a maximum pressure campaign and it is taking a number of steps to ensure that the Iranian regime’s activities are curbed. The State Department announced that it would be expecting all countries to cut their imports of Iranian oil to zero, and this has come fully into effect now.

The U.S. announced that its aim is to cut the regime off from the huge sums of money that it plunders on belligerent and terrorist activity. So far it is working because reports indicate that Hezbollah and other henchmen across the region have had major cuts to their funding. Hezbollah has even taken to calling for donations.

The Iranian regime is a threat on a number of levels. It is a major threat to peace and security, not just in the region, but on a global basis. Its spread of terror has been allowed to grow out of hand and the international community must take responsibility for this. International cooperation is a must, and it is urgent.

The European Union has a particular responsibility in this. Last year alone, there were a number of foiled plots that the Iranian regime had been involved with – attacks that would have caused many injuries and deaths had intelligence agencies not foiled them. Europe expelled several Iranian diplomats and jailed another.

Many European leaders have favoured a rather soft approach to Iran and its belligerence. The EU foreign policy chief Federica Mogherini has particularly fought for Iran and the preservation of business relations. However, this is at the expense of security in the EU. How does the regime show Europe that it is grateful for its efforts? It plans attacks. This says it all about the type of approach that does not work.

The West, including the United States, can ensure that further sanctions are imposed to curb the regime’s activities. But they can also have a closer look at what is happening inside the country. The people are continuing to challenge the Iranian regime and they are undoubtedly going to be the force behind regime change. Instead of getting prepared for war with Iran, Western leaders must support the people in their quest for a democratic and free Iran that does not support the nuclear activities and strives for peace.