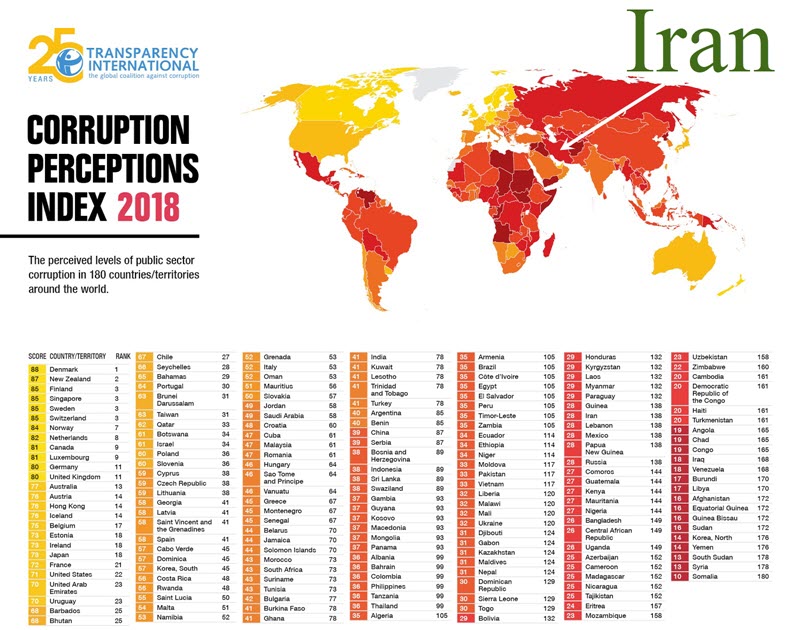 Transparency International is a non-governmental anti-corruption organization. It rates country’s governments and public services based on findings of experts and public opinion studies regarding perceived corruption.

The Corruption Perceptions Index (CPI) uses a scale of 0 to 100 to rank countries, where 0 is highly corrupt and 100 is pure.

In 2018, The Corruption Perceptions Report shows that two-thirds of countries rank below 50 on the scale. Although a few countries have done better than in the past, there is little overall improvement compared to the previous year.

According to Transparency International, the failure of most countries to control corruption “is contributing to a crisis of democracy around the world.” Patricia Moreira, Managing Director of Transparency International said, “With many democratic institutions under threat across the globe – often by leaders with authoritarian or populist tendencies – we need to do more to strengthen checks and balances and protect citizens’ rights.” She added, “Corruption chips away at democracy to produce a vicious cycle, where corruption undermines democratic institutions and, in turn, weak institutions are less able to control corruption.”

Shockingly, the United States has also dropped significantly in its ranking. It is no longer among the top twenty countries. Transparency International says, “The low score comes at a time when the U.S. is experiencing threats to its system of checks and balances as well as an erosion of ethical norms at the highest levels of power.”