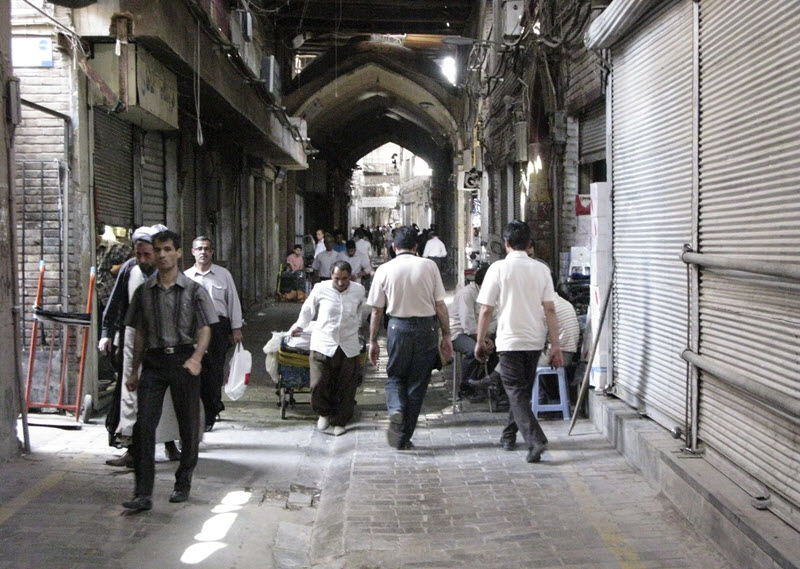 Tehran’s Grand Bazaar has thousands of shops and stalls crammed into its sprawling streets, each selling various wares, but each of them has one important thing in common: they’re suffering as a result of the Regime’s actions.

This leads to young sales assistants wanting to move abroad for a better life, buyers with little buying power, and, of course, large anti-regime protests. The Bazaar is often seen as a bellwether for the overall sentiment in Iran – evident in the large protests against the Regime in June – and one kitchenware shop provides an interesting microcosm for the Iranian people right now.

Zomorrod, which means Emerald in Farsi, is staffed by two men willing to talk to reporters about their fears, while many other market goers and stall holders also voice their anti-regime opinions outside.

Omid Farhadi, who hopes to emigrate to Europe, explained that inflation is causing people to panic buy, before things get more expensive and the cash in their pockets becomes literally worthless.

He said: “People are buying more because they think they won’t be able to buy stuff at current prices anymore. They are worried about price fluctuations. You have no price stability in this country. You go to bed and overnight a car that was worth 100 million rials is now worth 140 million.”

He explained that the economic situation in Iran, which he attributes largely to blamed Iran’s poor relations with the rest of the world, have caused many young Iranians to want to leave the country.

The Iranian rial is now worth only 150,000 to the US dollar, despite government attempts to fix the exchange rate, thanks to US sanctions and the mullahs’ handling of the crisis.

This has meant that many people are having to do without because they cannot afford it, including Kiana Ismaili, 26, shopping ahead of her wedding.

Further drops in the value of the rial are expected as new US sanctions come into place in November. Trump vowed to reinstate sanctions following his withdrawal from the nuclear deal, citing Iranian violations of the deal.

Alireza Alihosseini, another sales assistant at the store, said that the main problems in Iran are the result of the Regime’s factions and their petty squabbling, which has resulted in high unemployment, growing inflation and debt-laden banks.

He said: “Ninety per cent of our problems is because of the infighting.”

He said: “This is the people’s money. We have done nothing wrong to deserve this, but they are sending all our money to Syria.”