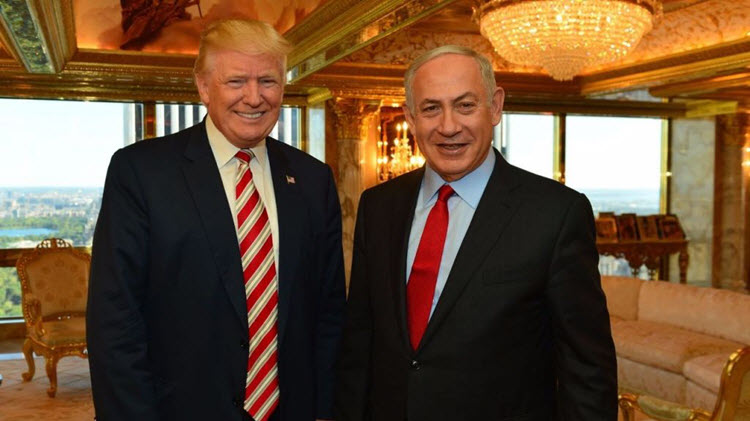 When Mr. Trump arrived in Israel after his visit in Saudi Arabia, he called for a peace deal between Israel and the Palestinians. It’s unclear what form this deal would take, and Trump said he prefers to leave it to both sides to decide between themselves.

Trump said Iran had negotiated a “fantastic deal” with his predecessor, winning “a lifeline and prosperity”, when he spoke in Jerusalem. He continued, ”…instead of saying thank you”, the Iranians were backing terrorism.”  On Monday, he accused Iran of “deadly funding, training and equipping of terrorists and militias”.

Mr. Trump told Mr. Netanyahu, “Iran will never have nuclear weapons, that I can tell you.”

In 2015, Iran accepted curbs on its nuclear program in return for tangible economic benefits, in a deal with world powers. Reportedly, the White House confirmed last month that the deal was still holding. Iranian President Hassan Rouhani, re-elected for a second term last week, championed the 2015 deal, but on Monday said on state TV, “The Iranian nation has decided to be powerful. Our missiles are for peace and for defense… American officials should know that whenever we need to technically test a missile, we will do so and will not wait for their permission.” Mr Rouhani also downplayed Mr Trump’s strong criticism of Iran at a summit in Saudi Arabia over the weekend, saying: “Who can say regional stability can be restored without Iran?”

After Iran’s contested election, its leaders are now minimizing the emerging threat from a US administration that has placed Iran back among the “axis of evil”.  A tough US stance against Iran could make it much more difficult for Hassan Rouhani to do business with the the rest of the world, and deliver on his promise of a better economic future for Iran.

Jeremy Bowen, the BBC Middle East editor writes that “President Trump believes he is the world’s greatest dealmaker, and making peace between Israelis and Palestinians after a century of conflict would be the world’s biggest deal.”

“I’ve heard it’s one of the toughest deals of all,” Trump said, speaking about the prospect of a peace deal between Israel and the Palestinians. However, he added that he had a “feeling that we’re going to get there eventually.”

As a candidate, Trump expressed views that went along with those of the right-wing Israeli government of Mr. Netanyahu, favoring expansion of Jewish settlements on occupied territory and a tough line towards Palestinian seeking independence.

There has recently been speculation on the Israeli right that Trump may expect concessions from them, says a BBC editor.

Before meeting Mr Netanyahu, Trump visited the site, according to Christian tradition of Jesus’s burial and resurrection, the Church of the Holy Sepulchre. Wearing a yamaka as a mark of respect, Trump then visited the Western Wall, one of the most sacred sites in Judaism. The wall is a remnant from the time of the Second Jewish Temple, which was destroyed by the Romans in 70 AD. Mr. Trump placed a note between its stones, as is the custom among visitors.

Trump’s visit is being overshadowed by political difficulties at home. On Monday, in a discussion with Mr Netanyahu, he denied suggestions that he had passed on sensitive Israeli intelligence to Russian diplomats at a recent meeting. He claimed he had not mentioned the word “Israel” at the meeting.

Latest reports on Moscow’s possible involvement in last year’s US presidential election, say that former National Security Adviser, Michael Flynn, will refuse to give evidence to the Senate Intelligence Committee after being subpoenaed.

Trump plans to meet with Pope Francis  in Rome, and Nato leaders in Brussels. He’ll return to Italy on Friday, to meet other world leaders at a G7 summit in the Sicilian town of Taormina, where climate change is expected to be discussed.