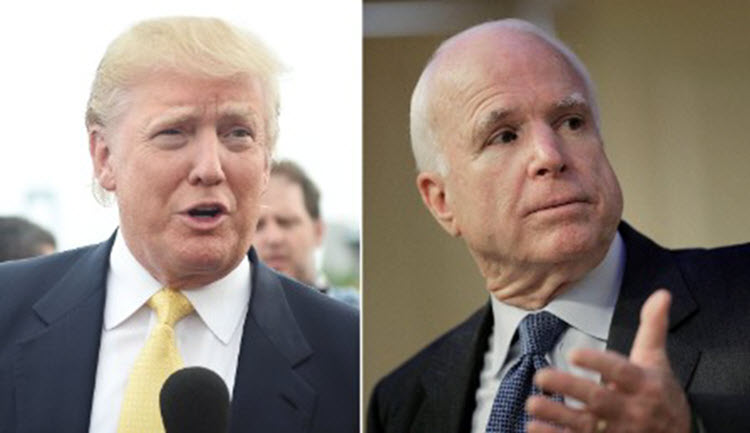 On Sunday, United States Senator John McCain said that President Trump’s trip to Saudi Arabia this weekend has sent a message to the Iranian regime, the Washington Examiner reported, that the U.S. and its allies are ready to block Tehran’s efforts to destabilize the region.

On Fox News Sunday the Republican Senator said, “There’s no doubt that if we’re going to impede the Iranian’s continued efforts to exert, certainly, significant strength in the region that this is an important step forward.”

In his speech in Saudi Arabia, Trump criticized the Iranian regime for support and aid for “unspeakable crimes” in Syria. He stated that the regime in Iran had provided Syria with “safe harbor, financial backing and the social standing needed for recruitment.” He continued, “From Lebanon to Iraq and Yemen, Iran funds, arms and trains terrorists, militias and other extremist groups that spread destruction and chaos across the region. For decades Iran has fueled the fires of sectarian conflict and terror; it’s a government that speaks openly of mass murder, vowing the destruction of Israel, death to America, and ruin for many leaders and nations in this very room.”

In the meantime, during a joint press conference with his Saudi counterpart Saudi Foreign Minister Adel Al-Jubeir on the sidelines of the Riyadh Summit, Rex Tillerson, United States Secretary of State, called on the regime’s President to end support and financing of terrorist groups. He said that the U.S. is working to bolster Gulf defenses in order to counter Iran’s influence in the region. Tillerson added that President Hassan Rouhani has an opportunity to end Tehran’s role in supporting “destabilizing forces that exist in this region.”

Tillerson also urged Tehran to end to its ballistic missile testing. He said that he hopes that Iran’s regime “restores the rights of Iranians to freedom of speech, to freedom of organization so Iranians can live the life they deserve,” and added that “if Rouhani wanted to change Iran’s relationship with the rest of the world, those are the things he could do.”

Also at the Arab-Islamic-American summit in Riyadh on Sunday, Saudi King Salman and President Donald Trump spoke of cooperation between the Muslim world and the U.S. to halt terrorism and extremism in the world. King Salman said, “We will cooperate in ending terrorism and extremism in all its shapes and forms. Islam was and will continue to be a religion of tolerance and peace.”

Trump called for the isolation of Iran, accusing the Islamic republic of fueling “the fires of sectarian conflict and terror.” He stated, “Starving terrorists of their territory, their funding, and the false allure of their craven ideology, will be the basis for defeating them.”

The Saudi foreign minister, Adel Jubair, announced at a press conference in Riyadh, “Saudi Arabia and America will work together against the hostile policies of Iranian regime and the regime’s support for terrorism. We and America have joint views about region problems such as Syria, Iraq and Yemen. This meeting will have important results.” The foreign minister added, “We along with our regional partners and especially U.S. will cooperate with each other to stop Iran’s meddling activities in the region. The Americans had provided additional assisting forces in the region. We will work with them on the sea security as well. All these measures are needed to push back Iran’s hostilities in the region. This politic has to stop altogether.”  He said further, that the Iranian regime became more hostile after the nuclear deal. “This regime is striking our cities with missile and its interference in Syria and Iraq and supporting terrorism is very obvious. President Trump wants to stand against the actions of the Iranian regime in the region and we want the same thing as well.”

Unless Iran is willing to be a partner for peace, nations of conscience must work together to isolate Iran, and deny it funding for terrorism. Pray for the day when the people of Iran have the government they deserve.