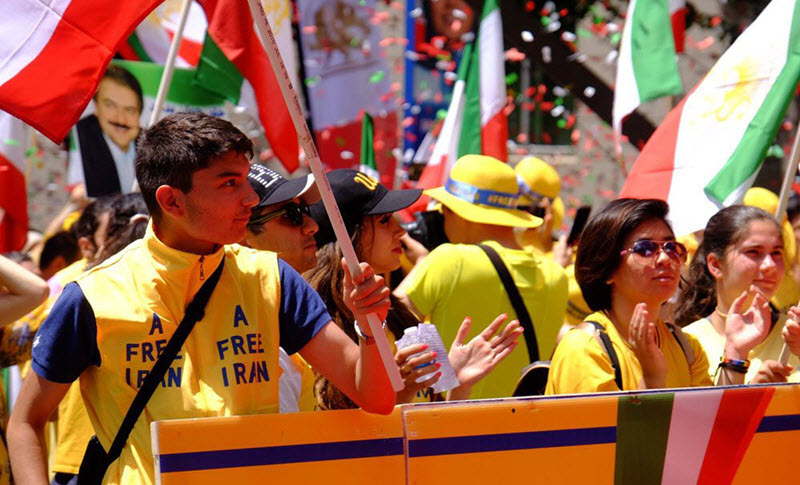 On Monday, Donald Trump met one of the demands of the Iranian-American community by putting sanctions on Supreme Leader Ali Khamenei and a whole host of his cronies, something that the Iranian Diaspora had advocated for in Washington DC on Friday.

Of course, the most important demand of the rally – regime change in Iran – will take longer to accomplish, but Trump will not be the one to do it. It’s not that the US couldn’t, but that it is the Iranian people’s right to depose the malign mullahs that have wreaked havoc on their country.

The Iranian rallygoers, who came from 40 states, marched from the State Department to the White House chanting, “Change, change, change. Regime change in Iran” in order to show their support for Iranian people’s uprising, which has spread to 160 cities and towns inside Iran since December 2017.

One of the protesters told the Washington Examiner that they don’t want the US to go to war with Iran, but rather just throw its support behind the Iranian people and the Resistance. Delaram Ahmady, from LA, said her family fled Iran in 1996 after her father, who was jailed for eight years in the 1980s, feared becoming a political prisoner again.

She said: “We don’t want an attack; we don’t want war. We just want the backing of the Iranian people and the Iranian resistance. I think it’s important to distinguish regime change when there’s a strong resistance in place.”

These tougher sanctions are one of the ways to go about that because it puts pressure on the Regime and keeps money away from terrorists. The recent terrorist designation of the Revolutionary Guard has also proved to be much more effective than a war between the US and Iran. The people called for more sanctions and for the Ministry of Intelligence and Security (MOIS) to be designated as a terror group as well.

Homeira Hesami, a Dallas medical physicist, said: “You’d be surprised, the maximum pressure campaign that is going on is supported by a majority of Iranians… It’s emptying the pockets of the regime.”

She came to the US after being a political prisoner in Iran at age 16, where she saw her cousin executed and a 13-year-old who had been tortured to the point where she couldn’t walk.

Many current and former lawmakers addressed the crowd and openly advocated for regime change, with Sen. Bob Torricelli (NJ-D) saying the mullahs can’t be reformed and regime change is urgently needed, while Brad Sherman (CA-D) advised that the Justice Department has now charged two regime agents for gathering intelligence on Iranian opposition members in DC.

Former governor of New Mexico Bill Richardson (D) said: “There should be a response [to Iran’s malign behaviour] but not necessarily a military response, perhaps additional sanctions… [or working to] build an international coalition to protect the vessels that go through this Persian Gulf [and] to stop Iran from building enriched uranium facilities.”

On Sunday, Vice President Mike Pence said: “What we want to do is stand with the Iranian people, thousands of whom gathered outside the White House on Friday, and thousands of whom took to the streets last year in communities across Iran.”