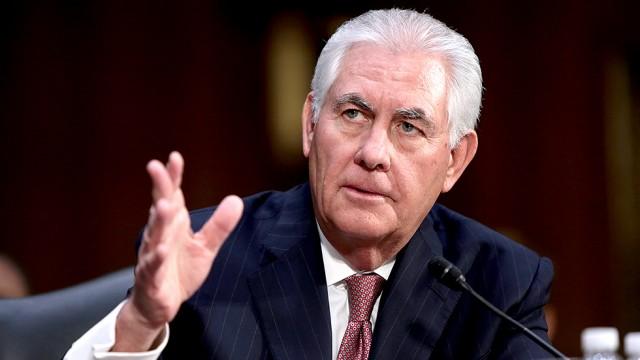 On Wednesday, during an address at the Hoover Institution in Stanford, California, Secretary of State Rex Tillerson said, “It is crucial to our national defense to maintain a military and diplomatic presence in Syria, to help bring an end to that conflict and assist the Syrian people as they chart a course to achieve a new political future.”

Tillerson said U.S. forces will remain “focused on ensuring ISIS cannot reemerge,” and emphasized that the threat of terrorism is the result of many dynamics in that country, such as Syrian President Bashar Assad’s need of foreign support to bolster his power, as well as Iran’s military expansion the threat. Tillerson maintained that Iran and Russia will not force a withdrawal of American troops.

Tillerson said, “In short, Syria remains a source of severe strategic threats and a major challenge for our diplomacy, but the United States will continue to remain engaged as a means to protect our own national security interests.” He stated that Iran’s involvement in Syria is a major concern.

“As part of it’s strategy to create a northern arch stretching from Iran to Lebanon and the Mediterranean, Iran has dramatically strengthened its presence in Syria by deploying Iranian Revolutionary Guard troops, supporting Lebanese Hezbollah, and importing proxy forces from Iraq, Afghanistan, Pakistan, and elsewhere,” Tillerson said. “Through it’s position in Syria, Iran is positioned to continue attacking U.S. interests, our allies, and [destabilizing] the region.”

Tillerson aimed comments at Americans who question the ongoing presence of the U.S. in Syria. The Islamic State was formed from the remnants of al Qaeda in Iraq after the 2011 withdrawal of U.S. troops. “We cannot allow history to repeat itself in Syria,” he said.

He addressed the broader scope of the counter-ISIS mission, saying that U.S. policymakers are looking at more than just terrorist-hunting. Tillerson called for a United Nations-led peace process that would result in the departure of Assad — who allowed for the “ungoverned spaces” that ISIS exploited as a result of his effort to maintain power through a civil war.

Assad’s departure would also curb the Iranian threat, according to Tillerson, “Reducing and expelling malicious Iranian influence from Syria depends on a democratic Syria,” he said. “For many years, Syria under Bashar al Assad has been a client state of Iran. A Syrian central government that is not under the control of Assad will have new legitimacy to assert its authority over the country.”
Source: Washington Examiner