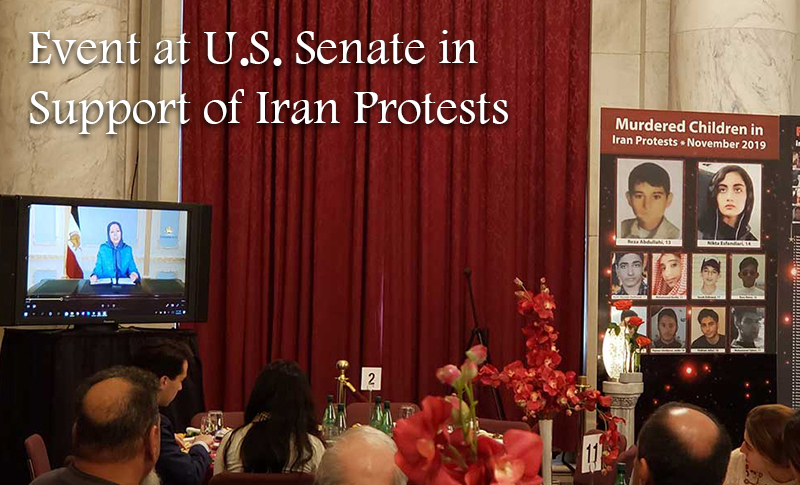 The Organization of Iranian American Communities (OIAC) organized on December 4, 2019, an event at the U.S. Senate entitled “Iran Uprising: The Nation Rises for Freedom.“

The Senators and speakers declared that they “stand with” the people of Iran “in their fight for freedom.”

“Our European partners need to step up… You’re seeing that in the bravery of the Iranian people right now…We need to continue to crank up the pressure on the regime until the Iranian people are finally free,” said Senator McSally.

Senator Cardin said in his message that “Despite the regime’s best efforts to hide its activities, the world is watching, and Congress is watching, and the United States is watching…I will never cease pursuing accountability for Iranian officials who violate human rights or benefit from corruption….. the world is witness to Iran’s murderous reprisals against its own people, and that we speak with one voice and demanding an immediate end to the bloodshed.”

Mrs. Maryam Rajavi, President-elect of the National Council of Resistance of Iran (NCRI), said: “The Iran uprising which started on November 15th spread to more than 200 cities across Iran in just a few days. The mullahs’ reaction has been ruthless. They have murdered in cold blood more than 1,000 protesters in the streets. There are shocking video clips showing revolutionary guards directly shooting at young people.”

Mrs. Rajavi added that “the mullahs’ regime has no support among the people and lacks legitimacy….the regime has no solutions to offer for political and economic crises… The MEK’s efforts to build an organized movement succeeded. The resistance units of the MEK played a key role in the uprising… The answer to the problem of Iran is to overthrow the religious dictatorship, which is the desire of the Iranian people.”

Maryam Rajavi concluded that “the solution for the crises in the Middle East, from Iraq to Yemen, and from Syria to Lebanon, is the overthrow of this regime.”

I urge all U.S. lawmakers to compel the clerical regime to stop torture and execution of those arrested during the #Iran uprising. U.S. lawmakers can lead this initiative. #IranProtests

“Governments and the international community must set aside any consideration or accommodation vis-à-vis Iran’s ruling theocracy and demand an immediate stop to the killings and arrests. And if the mullahs remain defiant, the UN must decisively put in place Security Council sanctions…European Union and the United States, to recognize the struggle and the resistance of the Iranian people to overthrow the clerical regime and support their right to resist against suppression and repression. The people of Iran expect Congress to lead the way in recognizing this noble right,” Maryam Rajavi said.

General Jones said: “I really do think that hope is coming. I really do think that the regime is more vulnerable now than it ever has been and that there will be an end to this.” General Jones added that “the NCRI is a coalition that has democratically elected a leader. They have Jeffersonian democratic principles. It is something that we should celebrate… and I look forward to being with you in Tehran one of these days.”

Governor Ridge called the NCRI for Iranians “a national appeal for justice and freedom and independence…” He added that “it’s about time that the United States of America leads that effort among democracies to not only condemn this regime but to publicly support the democratic uprising, proudly led, proudly led by the MEK.”

Ambassador Lincoln Bloomfield said in his speech that “the National Council of Resistance of Iran, the Mujahedin-e-Khalq, living in Albania and the OIAC supporters here and all across the United States are all the intellectual heirs of Iran’s great nationalist hero Mossadegh and the freedom movement…people who stand for an Iran governed with democracy, freedom, self-determination, universal principles, and unalienable rights.”