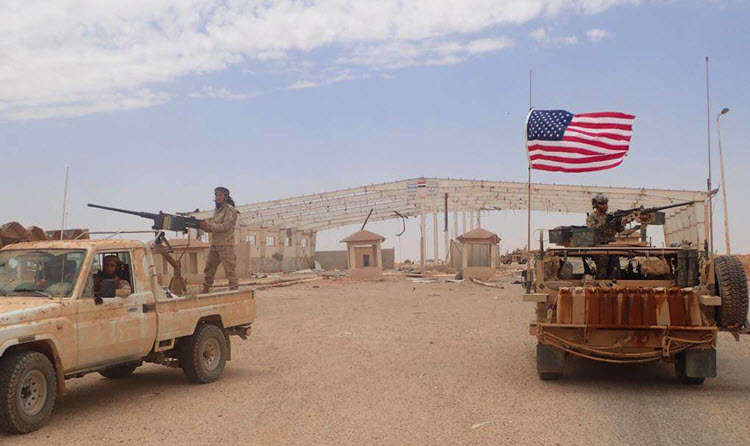 U.S. aircraft dropped a series of leaflets warning pro-Syrian regime militia to avoid the deconfliction zone around a small base near the Tanf border crossing, which lies between Syria and Iraq, this past weekend, as pro-regime forces are reportedly conducting armed patrols in the vicinity of Tanf, say officials at the Pentagon.

U.S. Central Command officials say that the facility is being used by U.S. and British Special Forces to train Syrian opposition forces for the fight against ISIS. A 55-kilometer radius around the base is designated as the deconfliction zone.

“It also sets up a potential showdown between the U.S. and forces aligned with Syrian President Bashar al-Assad,” wrote Shawn Snow and Mackenzie Wolf, in their article for The Military Times. They add, “With the pending liberation of the Syrian city of Raqqa by U.S.-backed Kurdish forces, elements of the Syrian regime and proxies allied to Iran have been jockeying for control.”

According to leading French expert on Syria and a visiting fellow at The Washington Institute for Near East Policy, Fabrice Balanche, with no agreement between parties to the conflict in Syria on what to do with formerly held ISIS territory, confrontation becomes a likely avenue. He said, “The regime and its allies are racing to establish an east-west ‘Shiite axis’ from Iran to Lebanon, and the United States [is] seemingly looking to cement a north-south Sunni axes from the Gulf States and Jordan to Turkey.”

According to officials in Baghdad, the base in southern Syria, less than 10 miles from Jordan’s border with Iraq and Syria, is used by small group of U.S. and British Special Forces to train two vetted Syrian opposition groups:  the Maghawir al-Thawra and Shohada al-Quartayn.

The primary mission of these groups is to take the fight to ISIS, Pentagon officials contend, although Jennifer Cafarella, a leading expert on the Syrian civil war at the Institute for the Study of War in Washington, D.C. acknowledges that both groups have been associated with anti-regime efforts in the past.

“These groups are remnants of the New Syrian Army, a band of former Syrian army defectors, and the Free Syrian Army, a formerly CIA backed anti-Assad force,” write Snow and Wolf, who add, “Ultimately, Syria is worried about the permanent presence of a U.S.-backed Syrian opposition group blocking a strategic route for the regime.”

Members of the Katib Imam Ali, an Iraqi Shiite militia allegedly associated with Iran, positioned a large number of forces, including tanks and modified pickup trucks with mounted heavy machine guns known as technicals, just outside the 55-kilometer zone. Officials in Baghdad stated that they will use force to defend the installation where U.S. forces are operating.

A CENTCOM spokesperson said, “Coalition forces are prepared to defend themselves if pro-regime forces refuse to vacate the deconfliction zone.”

Pro-regime militias tested CENTCOM’s resolve, on May 18, according to Captain Jeff Davis, a Pentagon spokesperson. It resulted in U.S. aircraft destroying a pro-regime tank and bulldozer after a convoy approaching Tanf refused to stop. Snow and Wolf report that, “The incident was followed up by a show of force by coalition jets that weekend, as some elements of the pro-regime convoy refused to leave the deconfliction zone.” The incident leads to concern that these militias may be attempting to build outposts just outside the deconfliction zone. “We struck what appeared to be a firebase they were constructing, they had a bulldozer and a front-end loader used to create berms,” Davis said.

Balanche said, “The smart solution for Assad allies would be to encircle Tanf, the rebels would be unable to move outside Tanf and Tanf becomes useless, and dangerously useless for American forces.”

Snow and World write that, “Iran has stepped up its efforts to open a land corridor through Iraq bridging its ally in Damascus while also connecting Iran to its proxy militant group, Hezbollah, in Lebanon.”

The Popular Mobilization Forces, an Iraqi Shia militia said to be aligned with Iran, moved though Kurdish-controlled Sinjar in Iraq on Monday. The operation opened a direct link from northern Iraq to Kurdish controlled areas in northern Syria, sending a message to Washington that Iran and Syria are serious about opening corridors, and that the Tanf crossing is strategic.

Cafarella called the area around Tanf, “a potential powder keg.” He added, “Mostly because I don’t actually think we are committed to denying eastern Syria to Russia and Iran.”