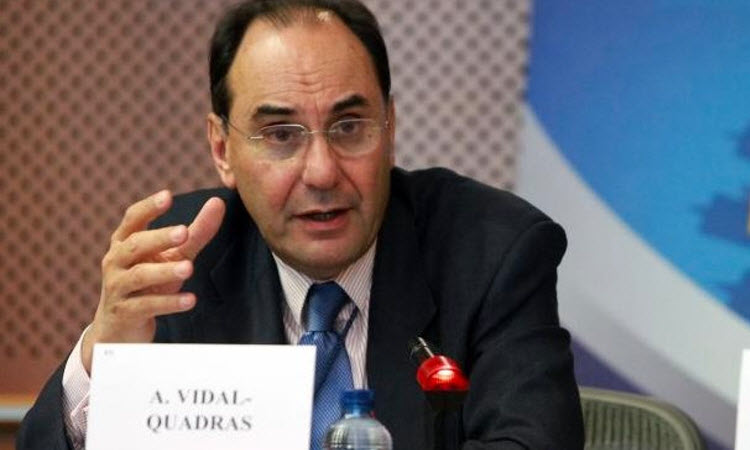 In a prelude to Saturday’s grand gathering of thousands of Iranian dissidents in Bourget, France, a conference was held on Friday 8 July in Roissy-en-France near Paris. Many European and US political figures attended the conference speaking in three separate panels.  They spoke on different aspects of the current situation in Iran and the western policy towards the mullahs’ government.

Vidal Quadras former vice president of the European Parliament spoke on the first panel.  He stressed that Iran should not be trusted and that the belief that the situation has changed in anyway with this country is far from truth.

“Many people believe that the situation in Iran has changed since the nuclear deal with Iran in July 2015,” said former vice president of the European Parliament, “but this could not be any further from the truth.”

Quadras who is in Paris to attend Saturday’s grand gathering at Bourget for a Free Iran has been a long-time supporter of the Iranian movement for freedom.  He has spoken many time and written extensively in this regard in the past.

He expressed concern that the sanctions imposed on the regime nearly brought the regime to collapse but now they have had the time to recuperate. Vidal Quadras called the regime “astute” and said that they can use the new situation brought about with the agreement to impose their strategy in the region. “Let’s not be too optimistic,” he cautioned.

Mr. Vidal Quadras also added that it is very deceptive when EU officials such as Federica Mogherini go to Iran. The images of her smiling with president Rouhani look very naive. It makes the situation look “rosy”, when this is far from the reality, he stressed.

Mr. Vidal Quadras will be speaking at the Bourget “Free Iran” gathering Saturday in support of the Iranian Resistance and Iranian people in exile for a regime change in that country.