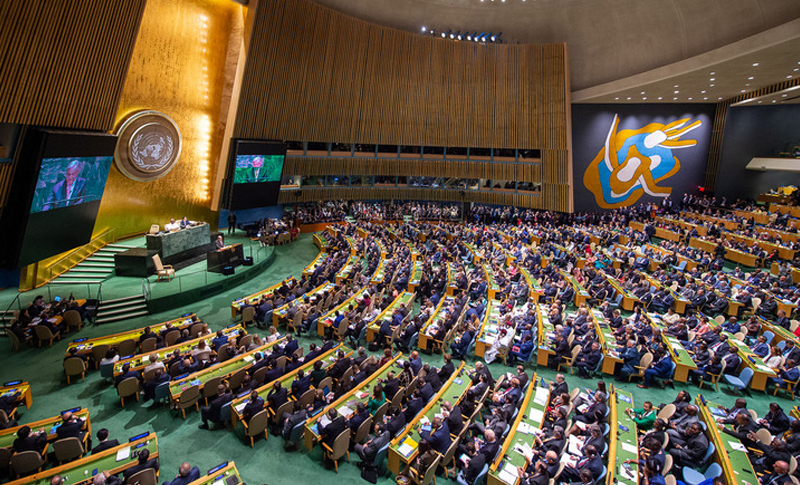 On Wednesday December 18, 2019 the UNGA adopted a resolution condemning the violation of human rights in Iran.

The Resolution was proposed by Canada. The Resolution was adopted by 84 votes in favor, and 30 votes against, while 67 states abstained. Saudi Arabia, United Arab Emirates and Bahrain were among those who voted in favor of the resolution.

The resolution expressed concern about freedom, religious and belief restrictions and increasing pressure against the religious minorities, including Bahai’s, Dervish and Soufi’s.

The resolution also mentioned the bloody crackdown of November 2019 nationwide protests. The regime still has not published the exact number of those killed or arrested. UN called on Iran to release persons detained solely for taking part in peaceful protests or the exercise of their human rights and fundamental freedoms.

On December 7, 2019 UN High Commissioner for Human Rights Michelle Bachelet said that at least 7,000 people have reportedly been arrested in 28 of Iran’s 31 provinces since mass protests broke out on 15 November, saying that she was “extremely concerned about their physical treatment, violations of their right to due process, and the possibility that a significant number of them may be charged with offences that carry the death penalty, in addition to the conditions under which they are held.”

Mrs. Maryam Rajavi, the President-elect of the National Council of Resistance of Iran (NCRI), welcomed the United Nations General Assembly’s adoption of a resolution censuring the flagrant and systematic human rights violations in Iran. She said: After 66 UN condemnation, the world community must take effective measures to stop the escalating trend of human rights abuses and the continuous crimes against humanity by the clerical regime.

She added: Silence and inaction vis-à-vis the countless crimes perpetrated by the religious fascism ruling Iran in the past four decades have emboldened it in perpetuating and intensifying its crimes against humanity. The massacre of more than 1,500 people and youth, the wounding of 4,000 more and the arrest of 12,000 during the nationwide uprising in November is one of the most horrific crimes in the 21st century and by any measure amounts to crime against humanity.

Mrs. Rajavi emphasized that those responsible for the heinous atrocities in November, the regime’s supreme leader Ali Khamenei, its president Hassan Rouhani, and other regime leaders, have been involved in the ruling theocracy’s crimes, including the massacre of 1988. Their impunity must end. The Security Council must recognize the regime’s crimes, including the 1988 and the 2019 massacres, as crimes against humanity so that those responsible are brought to justice.
The NCRI’s President-elect again underscored the need for the formation of a fact-finding mission by the UN to investigate the November massacre and to travel to Iran to visit the prisons and those arrested. She added that Iran’s ruling theocracy is the most barbaric and egregious abuser of human rights in the world today. It has flagrantly trampled on the Iranian nation’s fundamental rights in all its political, social and economic aspects, and must therefore be banished by the international community.