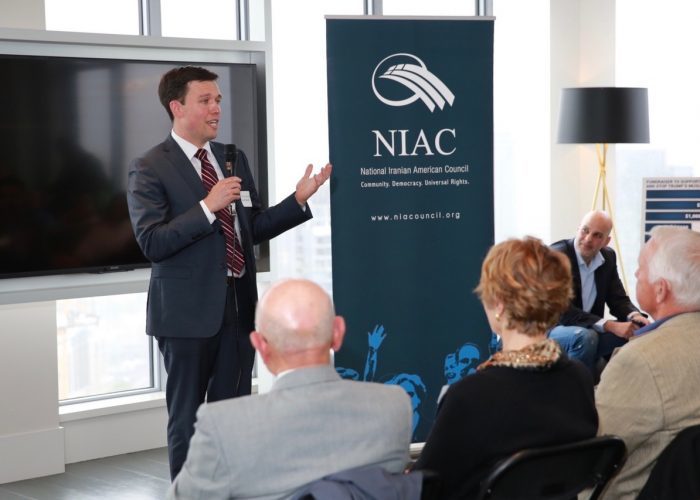 by Staff writer, SF
The Iran lobby’s leading organizer, the National Iranian American Council (NIAC), has been perceived to be a non-partisan, human rights group that advocates for the welfare of Iranian-Americans.

An article in IranLobby.net, says that, “In truth, the group’s links to the regime and its almost-cult-like obedience to supporting the regime and not criticizing it has left it open to legitimate charges of being an Iranian regime front group and nothing more.”

The larger Iranian-American community has shown a willingness to question the NIAC’s motives, especially now that the Iranian resistance has built ties to the broader Iranian diaspora.

The NIAC claimed that, in the wake of the nuclear agreement two years ago, democratic reforms would occur. These claims have proven illusory. In fact, Iranian-Americans are alarmed at the regime’s targeting of dual nationals. Several notable Iranian-Americans have been arrested, and are held without trial or charge.

As well, Iranian-Americans have been horrified by postings on social media by friends and relatives in Iran that showed the brutal crackdown on recent protests, including reports of Iranian women being rounded up and tossed into prison for simply taking off their headscarves as a sign of solidarity with protestors.

Northern California’s San Mateo and Sacramento counties both have sizable Iranian populations. The NIAC has launched an effort to participate in voter education campaigns there. These voter education efforts seem to be designed to help educate voters — for example, by translating documents into Persian. These efforts are funded by grants from the Hopewell Fund and the Future of California Elections. This voter outreach is important in presenting a more about the NIAC to the Iranian-American public, aside from their support of the nuclear agreement and its association with progressive Democratic organizations.

Investigative journalists, and landmark disclosures through lawsuits, has brought to light the NIAC’s inconsistency, however. This may explain why the NIAC doesn’t have broad support in the Iranian-American community. The benefits and results directly affecting this community through the NIAC’s advocacy are said to be few.

While the NIAC tries to educate voters in Northern California, the Iranian-American community, especially in the Los Angeles, where the largest Iranian diaspora community resides, has been largely silent in supporting them. Instead, they are a vocal booster of the Iranian resistance movement both financially and politically, including the National Council of Resistance of Iran (NCRI).