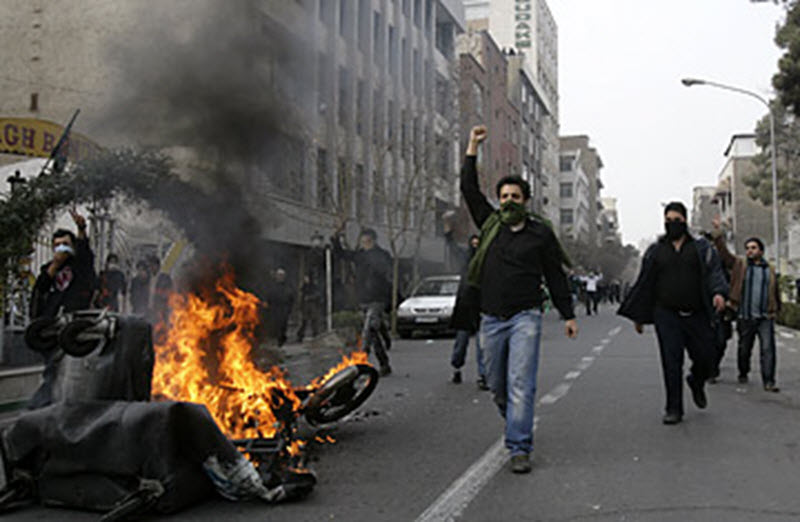 Almost exactly one year ago, the Islamic Revolutionary Guard Corps (IRGC) were warned about the prospect of mass protests in Iran, so they dispatched special patrols of the Basij forces in order to create an intimidating atmosphere across Iran with the hopes of preventing any the protests.

This failed and a nationwide uprising broke out in the last few days of December 2017, which the Regime was in no way prepared for, and caught the attention of the world. Iranian President Hassan Rouhani even believes that this sparked the US decision to pull out of the nuclear deal with Iran and reimpose tough sanctions on Iran. The idea that Donald Trump’s goal in Iran is for regime change has been echoed by Channel 4 in the UK and Al Jazeera, but the US has not said that themselves.

However, Iranians on the ground do not believe that some Western media outlets are accurately representing the domestic situation and public opinion over US sanctions imposed in the wake of the US nuclear deal pullout and subsequent “maximum pressure” campaign by the Iranian Regime. In fact, ordinary Iranians do want regime change and they appreciate the change in pace from the failed appeasement policy of the past 40 years that has allowed the mullahs to keep their grip on power.

Zohreh, a blogger whose last name has been withheld for security reasons, said: “It doesn’t matter who takes office in the White House or Élysée Palace but what is evident is people want to get rid of this regime.”

Reza, a 67-year-old homeless man living in the east of Isfahan province, said that the sanctions relief granted by the nuclear deal did nothing to improve the lot of ordinary Iranians, thanks to mass corruption by the mullahs.

He said: “Sanctions do not matter. We have been poor, our water, gold, oil and etc are stolen, this country is riddled with corruption. The authorities are responsible for our difficulties, not the foreigners.”

Reza, a former farmer, has been homeless since 2016 when he was forced to sell his lands and even a kidney to pay for his mother’s medical treatment, although it didn’t save her. He now says that he has nothing to lose and always participate in protests.

And he is not alone. Despite the suppression, workers have joined the protests of poor citizens across the country, calling for the payment of overdue wages. One protester featured in a prominent clip on social media can be seen shouting “Would the kids of authorities tolerate two days without food, no clothes? Let’s emphasize, two days without their luxury cars?”

Zohreh said: “The ruling regime has security forces here and apologists in abroad. While Iranians are protesting and daily executions are a part of our life, a golden opportunity like Khashoggi crisis helps the apologists to deflect mounting criticism over regime’s domestic oppression and spending Iran’s wealth to support terrorists across the Middle East”.

The Khashoggi crisis refers to the murder of Washington Post journalist Jamal Khashoggi in the Saudi Arabian embassy in Turkey. Many Iran apologists have tried to deflect criticism of them because of this well-publicized case, but Iran’s human rights record speaks for itself.

Fouad, a young unemployed Iranian Arab, says that the human rights situation has been deteriorating and that the Arab minorities are seen as second-class citizens., which is backed up by reports from rights organizations that the regime secretly executed 22 Iranian Arabs for their political beliefs.

He said: “More executions, more arbitrary arrested of people. When the world doesn’t care about you, executed friends are buried in secret graves, remaining silent is not an option.”