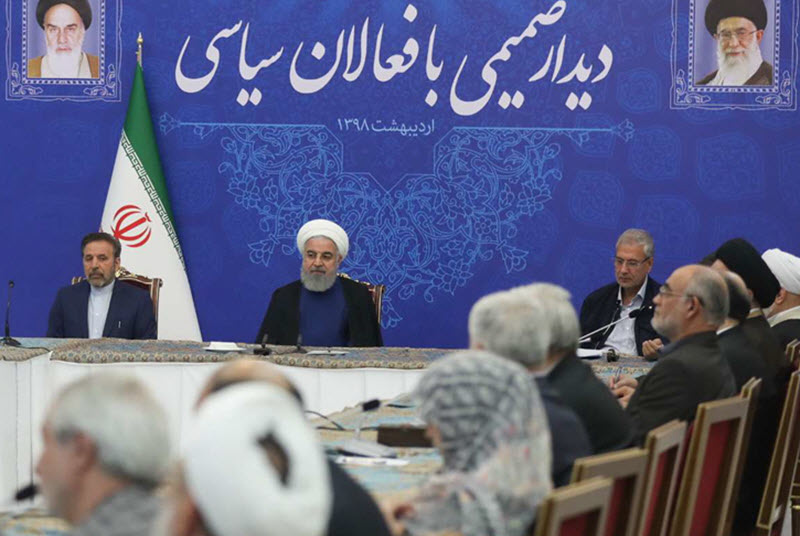 Iranian President Hassan Rouhani talked about Iran’s existing state of affairs, especially regarding social or political issues during his speech on Ramadan. He was meeting with so-called political activists from different factions on May 10th.

Referring to his rival factions, he said, “they have a vested interest in maintaining the status quo”, and he asked them to refrain from attacking him and his followers.

He criticized his opponents in the regime. “In the days of [the Iran-Iraq] war we had no banking or import-export problems and the only sanction against us was about weapons.” He attempted to explain the popular discontent and opposition the regime faces among ordinary Iranians. “During the war, there was an almost consensus among the people that the government isn’t to blame for the problems… and helped to solve the problem.”

“Also, mosques and Friday prayer tribunes, and the cyberspace issues are not under the control of the government. So you’re asking the government for something that isn’t under its control,” he explained.

Member of the Expediency Discernment Council, Hossein Mozafar, said that although 30 people had requested time to speak to the President during the meeting, only 14 were allowed time. The meeting did not last longer than 45 minutes. “The people’s problem is that the government is hanging loose and people feel that everybody does anything they wish.”

Mozafar claims that he also warned Rouhani about any type of controversial decision like increasing the prices of fuel. “Because if the price of fuel is increased, prices of other goods and services will become uncontrollable and the impact of this inflation will show itself ten times over in other sectors. This will also increase discontent 10 times.”

At another Ramadan gathering last Saturday, Rouhani met with a group of the ruling elite who he referred to as “members of the government’s family.” He admitted that the morale of the members of his government is low, and appealed to the family of members of government officials to help increase their loved one’s morale so that they can bear the heavy weight of their duties. “Our job.” He said, “is more difficult than ever and 2018 and 2019 have been among the most difficult years in the past 40 years.” He added, “No domestic or foreign conspiracy can break the resolve of government officials to serve the public.”

Like Rouhani, Member of Iran’s Parliament and presidential ally, Alireza Rahimi, referred to a “domestic conspiracy” theory, when he recently spoke about a managerial coup d’état. The regime-linked Tabnak website cited him as saying, “While demonizing the government and tainting the image of national and regional achievements is the order of the day for the rival faction, there is the talk of managerial coup d’état against the government.”

While the U.S. is completing its battle formation in the Persian Gulf, meanwhile, fear is escalating a deeper rift among Iran’s rulers.