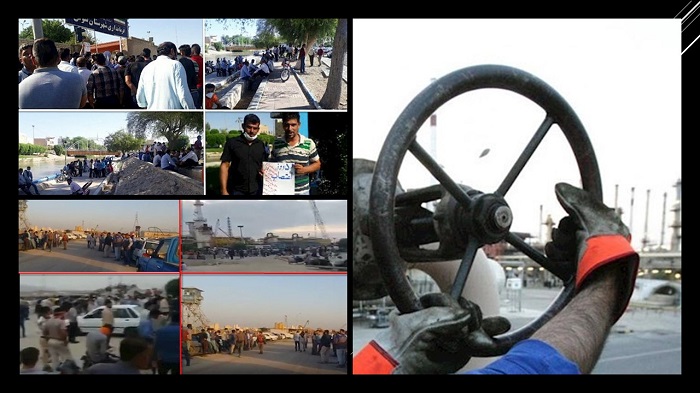 Since Saturday 1st August, workers from the oil, petrochemical, and gas sectors in Iran have been on strike, including workers at the refineries in Abadan and Mahshahr in the province of Khuzestan.

The People’s Mojahedin Organization of Iran (PMOI / MEK Iran) tweeted on August 2 that the workers of the South Pars natural gas project, Bushehr, and Asaluyeh have joined the strikes launched by their colleagues in the oil, natural gas, and petrochemical industry.

#Iran’s oil industry workers are on strike. Here’s why it matters.#IranProtestshttps://t.co/NDQQZXpUg7

Just a few days later, on Tuesday 4th August, they were joined by workers from the Isfahan refinery in the central part of the country. The site is now unable to operate.

It is believed that on Monday 3rd August, workers at the Tous asphalt factory in Dashte Azadegan in the province of Khuzestan province continued their strike for the second day.

Workers across Iran, especially in these industries have been struggling with very poor working conditions, made worse by the intense heat of the summer. Many workers are left to carry out their tasks in unsafe working environments with very poor facilities. And of course, the majority of these workers receive very low salaries, forcing them to live in very poor conditions – for many meaning they are living in absolute poverty.

The poor economy has caused high rates of inflation and the price of many essential goods has risen extremely sharply over the past few years. This leaves many of these workers with barely enough money to pay for a weeks’ worth of essentials, never mind an entire month. Worsening the situation even more for the people is the very late payment of salaries, with many owed several months of salary payments.

Workers in the energy sector, including in the refineries, have very little job security and have the constant threat of being fired at any time held over their heads. Many do not have pensions or health insurance cover.

The notorious Islamic Revolutionary Guard Corps (IRGC) oversees many of these facilities. The IRGC, in fact, controls a huge portion of the country’s economy and is involved in highly corrupt practices.

While workers wait months for their wages, the refineries and energy facilities have been working at full capacity. The end products are also being sold at ridiculously high prices, so there is no excuse for the withholding of salaries.

Last year, the Iranian regime announced that the price of gasoline was going to be greatly increased – two or three-fold. This sparked a nationwide uprising that really shook the regime. Although the grievances aired by the people were sparked by this economic element, it became very clear that the people’s criticisms and objections to the regime run so deep that the only solution is to see the regime collapse.

Another uprising is brewing and it might be the one that finally sees the regime collapse. The people of Iran, the first victims of the regime, have endured so many hardships over the past four decades and they are determined to ensure a brighter future for themselves.

Mrs. Maryam Rajavi the President-elect of the National Council of Resistance of Iran’s (NCRI), hailed the protesting workers in Abadan, Qeshm, Parsian, Lamerd, Mahshahr and South Pars, emphasizing that the oppressed workers have rightfully risen in demand of their wages and pensions that have been plundered by the mullahs’ regime.

Aug 4 – Isfahan, central #Iran
Employees and workers of the Isfahan refinery began their strike. Many other such facilities in Iran are also witnessing protests and strikes by their workers.#IranProtestspic.twitter.com/UqQAqqaz4K

While saluting the workers on strike in the oil facilities and refineries of Khuzestan, Bushehr, Hormozgan, Fars, Isfahan and Ilam, I urge working people across #Iran, particularly the oil workers and workers in other sectors, to rise up in support of them. #Iranprotests