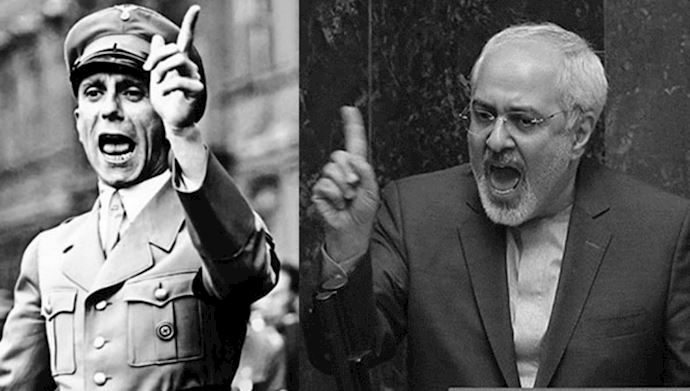 Iranian regime’s Foreign Minister Mohammad Javad Zarif defended himself in front of the regime’s parliament two weeks ago, saying that he always obeys the orders of Supreme Leader Ali Khamenei, bragging about how he is seen as the “chief apologist” of the regime across the world.

This title, which was not a compliment, was handed down by US Secretary of State Mike Pompeo when the US sanctioned Zarif because he was “complicit in the regime’s outlaw behavior”.

Recently, President @realDonaldTrump sanctioned Iran’s Supreme Leader, who enriched himself at the expense of the Iranian people. Today, the U.S. designated his chief apologist @JZarif. He’s just as complicit in the regime’s outlaw behavior as the rest of @khamenei_ir’s mafia. pic.twitter.com/XhDdqR6rik

Indeed, he is. The Iranian resistance has compared Zarif to Nazi propaganda minister Joseph Goebbels for his constant repeating of lies until they are believed. It’s the very epitome of ‘if you repeat a lie often enough, it becomes true’.

In August, when Zarif and a delegation were visiting Sweden, the foreign minister lost his temper over ex-pat Iranians and supporters of the opposition People’s Mojahedin Organization of Iran (PMOI/MEK) holding rallies in Stockholm to protest his visit, which provides a window into his madness.

He said: “These same people who are standing outside this place, ask them to take part in Iranian sessions and see if they come out alive… They can’t even be in Iraq because the Iraqi people will eat them alive.”

This claim is laughable if you look at the recent protests that have engulfed Iraqi cities, particularly those on the border with Iran, which proves that the Iranian regime has lost any support they had among the Iraqi people.

If Zarif had continued, he’d probably have even claimed that the Iraqi people would open their houses to Iran’s mullahs; the same Iraqi people who are now attacking the Iranian consulate.

The reality is that when the mullahs feel obliged to repeat lies and fake news, their regime is facing several crises both domestically and abroad. And because the regime is always lying, they are always in crisis.

The regime has claimed for years that they have vast support in Iraq’s Shiite community, but the recent protests that saw hundreds of thousands of Iraqis take to the streets of Baghdad and other cities across the country, chanting “Iran, out, out!” as they marched, have proved that to be an incredible lie. The Iraqi people demonstrated that they do not care about the Iranian regime and wish to rid their county of the mullahs’ meddling.