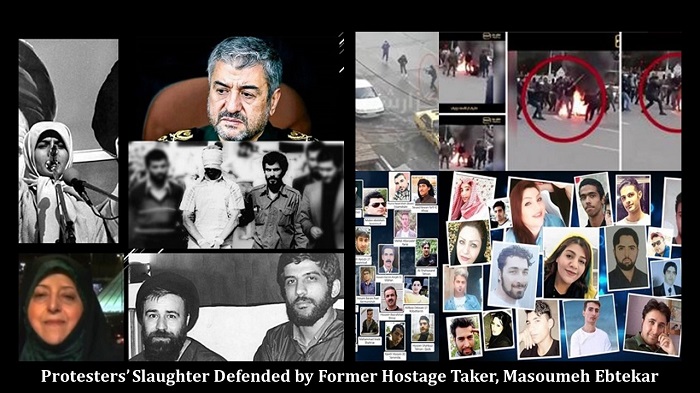 The woman who is remembered for being the spokesperson for the hostage-takers when the U.S. Embassy was stormed back in 1979, Masoumeh Ebtekar, nicknamed “Sister Mary,” has defended fatal attacks made on protesters during the November 2019 protests.

Ebtekar claims that “in that incident, there were a number of protesters and a limited number of terrorist gunmen who attacked the arsenal and the city defense center. She [the Quds governor] said: ‘I should defend people’s privacy and security.”

The National Council of Resistance of Iran (NCRI) issued a new report to expose the regime’s ongoing commitment to terrorism, citing the ongoing anti-Iran regime protests in Iraq and Lebanon, and to name the hostage-takers,  who are still top officials in the regime.

The NCRI said the following key figures in the regime were involved in the embassy takeover:

A sudden gasoline price rise back in November last year led to protests that quickly became a focus for anti-regime anger. Tens of thousands of Iranians poured out onto the streets across Iran chanting such slogans as “Death to the Dictator.” Iran had become a powder keg ready for the slightest spark to ignite it after years of corruption, economic mismanagement, and heavy-handed state brutality. All it needed was a spark provided by the fuel price rise for resentment to boil over.

The Iranian regime retaliates brutally against all forms of dissent

The protests in November last year seriously worried the mullahs who sent out the State Security Forces (SSF) and Revolutionary Guards (IRGC) to suppress the protesters. This they did with deadly enthusiasm, killing an estimated 1,500 protesters and arresting many more. Most who arrested faced torture and inhumane treatment as political prisoners in Iranian jails. Reuters confirmed in a special report on December 23, 2019, about the deadly crackdown on November nationwide protests in Iran the death toll of 1500 that was announced by the People’s Mojahedin Organization of Iran (PMOI / MEK Iran) on December 15, 2019.

Ebtekar’s comments show that the regime had no intention of doing anything else but treat the protesters with the utmost brutality.

As the anniversary of the protests draws near, the regime is again drawing on some of its most notorious defenders as the prospect of another uprising is increasingly likely.

The Official IRIB Newsagency on November 2nd, 2020 reported that a ruthless SSF commander, Colonel Alireza Daliri, has been appointed as the Kermanshah SSF head. It might be remembered that Daliri was the man who headed a massacre of Kurds in western Iran in 1980.

More than 141,700 people have died of the novel #coronavirus in 462 cities checkered across all of Iran's 31 provinces, according to the Iranian opposition PMOI/MEK.

The social and economic situation is now much worse than it was even in November 2920. The regime is out of ideas and has basically given up trying to do anything about the spread of Covid-19. Over 141,700 people have died of the coronavirus in Iran, according to reports by the Iranian opposition the National Council of Resistance of Iran (NCRI) the People’s Mojahedin Organization of Iran (PMOI / MEK Iran).

In fact, it almost seems that the regime is hoping that the virus spreads unheeded to act as a weapon against dissenters. At the same time, the economy is in free fall with again the regime unwilling or incompetent enough to use its hoard of cash that it has stolen from Iranians to help improve conditions for those affected by the pandemic.

IRGC to Raid Homes in Vain Attempt to Suppress #COVID19: This is a method being used by the regime to scare Iranians from taking part in MEK resistance movement activities by the (#PMOI / #MEK #Iran). #WeStand4FreeIran pic.twitter.com/6kYtyD5MY7

The regime is so clueless that it has even ordered the IRGC to raid ordinary Iranians’ homes to look for those who might have symptoms of COVI-19. This is, of course, just an excuse for the IRGC to search and detain anyone they think is against the mullahs’ rule. It’s like trying to clamp the lid on a simmering pot when the regime tries these tactics. Soon enough the lid will fly off and the whole boiling mess will erupt in their faces.