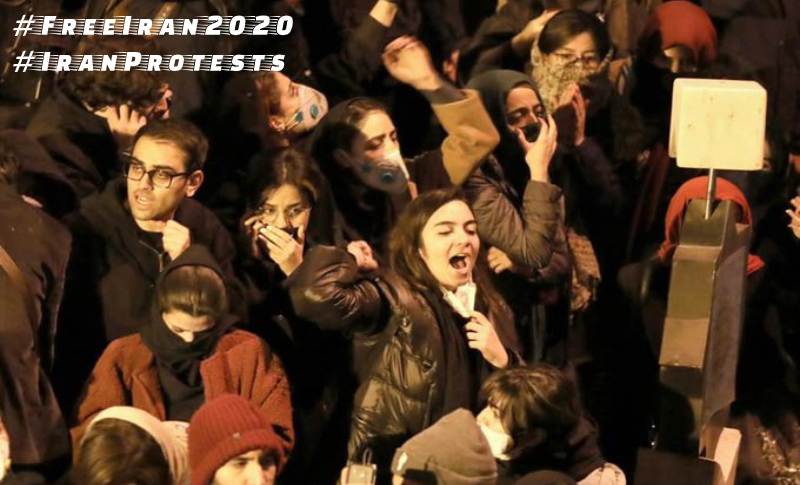 Following the acknowledgment made by the Iranian regime’s Revolutionary Guards (IRGC) Aerospace Force chief Amir Ali Hajizadeh on shooting down the Ukrainian airliner, thousands of Iranians in Tehran and a number of other cities protested against the Iranian regime leaders by chanting “Down with the dictator!” and “Down with Khamenei!” This is a direct reference to the regime’s supreme leader Ali Khamenei.

What Do the People Want?

A large number of people joined thousands of students in Tehran’s Amir Kabir University, gathering in Hafez Street and other areas, chanting “Death to the dictator,” “Death to liars,” “Have no fear, we are all together,” “Death to this murderous regime,” “Don’t call us seditionist, you are the sedition, you tyrant,” “Death to this theocracy, for all these years of crimes,” “We did not give our lives to compromise and praise the murderous leader,” “Shame, shame to Khamenei,” “1,500 killed in November” and “Soleimani is a murder, his leader is also a murderer.”

The January protests are in continuation of the November 2019 uprising during which the Iranian people clearly demanded the mullahs’ overthrow.

The recent protests openly blamed and challenged the IRGC, which has been the regime’s powerbase for decades. This vividly indicates a new phase of more defiance in Iran as the regime has become soignificantly weaker. In chanting against the Shah’s regime and the current religious fascism, protesters showed that they reject despotism in any shape and form, and that democracy is the only way forward.

The Iranian people’s protests are quickly spreading and so far, in addition to Tehran, 16 other provinces have witnessed protests.

The recent protests put also an end to the regime’s propaganda over the killing of Qassem Soleimani.

Protesters in Tehran and other cities tore down Soleimani’s posters and chanted “Soleimani is a murderer, so is his leader (Ali Khamenei),” condemning the regime and the IRGC for shooting down the Ukrainian airliner. Protesters also lashed out at the regime for lying about it.

In the aftermath of the November anti-regime uprising in 191 cities throughout Iran, during which the regime killed more than 1,500 protesters, wounded at least 4,000 and arrested over 12,000, the tide has turned against the regime.

The January 11 and 12 protests are further proof that the Iranian people’s determination to overthrow the regime will continue until the day that freedom and democracy returns to Iran.

In an interview with Fox News, Maryam Rajavi, the President-elect of the National Council of Resistance of Iran (NCRI), hailed the arisen students in Tehran and other cities for taking to the streets for a second day.

“With their slogans against Khamenei and the IRGC, they displayed the demand of the Iranian people for the overthrow of the ruling religious dictatorship and the establishment of democracy and popular sovereignty in Iran,” Madam Rajavi said.

“Time has come for the international community to acknowledge the reality that the religious fascism ruling Iran does not represent the Iranian people, and recognize the national call for the overthrow of the mullahs,” the NCRI President added.

A number of U.S. lawmakers voiced support for the Iranian people’s struggle for freedom and democracy.

Senator Lindsey Graham (R-South Carolina) said on Twitter: “Could not agree more with Secretary Pompeo. The Iranian people deserve better. The American people stand with the Iranian people for their freedom.”

U.S. Senator Todd Young (R-Indiana) wrote on Twitter: “I’m inspired by the bravery of the Iranian people who are peacefully protesting in the streets this evening. May God watch over them.”

While referring to this issue, U.S. Senator Tom Cotton also wrote on Twitter: “The brave people of Iran are not fooled. They have no illusions about the evil men who rule them. As they yet again take to the streets, God bless them and their hope for a better future.”

Congressman Mike Gallegher also issued a message of support on Twitter saying: “Iran’s admission they downed a passenger plane is proof that the primary victims of the Iranian regime are the Iranian people. As I said I hope our allies unite with us to impose maximum pressure on the regime and drive a wedge between the regime and its people.”