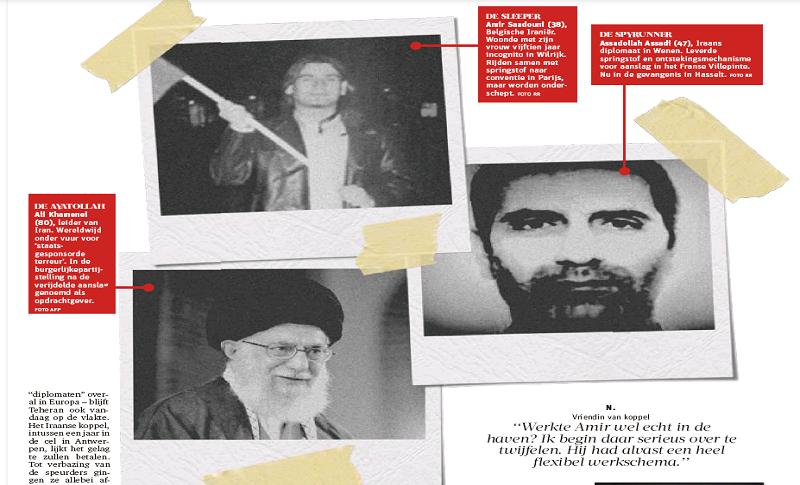 The foiled terrorist attack on the annual event of the Iranian Resistance on June 30, 2018, in Villepinte, north of Paris was the focus of Belgian daily Gazette van Antwerpen (GVA).

A Belgian-Iranian couple and an Iranian diplomat were among six people arrested for allegedly plotting the bombing of the event, attended by thousands of supporters of the People’s Mojahedin Organization of Iran’s (PMOI/MEK Iran).

An article written by Pieter Huyberechts in GVA on Monday, October 28, 2019, mentioned the direct role of the Iranian regime’s Ministry of Intelligence (MOIS) in the plot.

On their way to Paris, the terrorist couple was arrested with 500 grams of TATP explosive and a detonator hidden in a toiletries bag.

According to GVA, the couple was on no blacklist, let alone on a list of potential terrorists. But that was exactly the purpose. The so-called “good people” were sleeper cells waiting to be ordered to strike.

According to the newspaper, Amir Saadouni (38) and his wife Nasimeh Naami (33) went to Iran many years ago and were recruited by the regime’s intelligence ministry. They were arrested in Sint-Pieters-Woluwe, 30 minutes after they left their home in Wilrijk to Paris. “Their goal was clear: exploding a bomb at an event with thousands of people and creating chaos as much as they could,” said an informed source.

The GVA continued: “An intelligence source said that ‘the couple’ was on their way to the annual meeting of the National Council of Resistance of Iran (NCRI), the main Iranian opposition movement in exile.” For many years, their huge event is a thorn in the side of the Iranian regime.

Georges Henri Beauthier and Rik Vanreusel, the lawyers of about forty prominent personalities who were present in Villepinte on June 30, 2018, said: “There is still uncertainty about how many people could have been killed. But that it had to be a bloodbath speaks for itself.”

For comparison, the amount of TATP that was going to be used was the same amount of explosive used in Zaventem airport and Brussels Maelbeek metro station (32 killed) as well as the exploded plane of Egyptian Airlines (244 killed) terrorist attacks in 2016.

The only question that remains is: who gave the order and instruction?

On Sunday, July 1, 2018, German special forces arrested an Iranian diplomat from Vienna at a gas station in German Aschaffenburg on A3 highway in a hired Ford.

His name was Assadollah Assadi (47), a leading member of the MOIS. The man who smuggled and provided TATP in a diplomatic travel bag via Tehran to Vienna and then Luxembourg to the terrorist couple. “A piece of cake for the explosives expert,” according to GVA.

After Assadi’s arrest, all traces began to point to Tehran.

The French intelligence and President Emmanuel Macron explicitly pointed to the Iranian regime as the mastermind behind the Paris attack. But Tehran denies everything.

A specialist who wanted to stay anonymous said: “That’s how it always goes.

“Look at the drone attack that broke down Saudi oil production. Look at numerous thwarted attacks in the West, most recently in Denmark: Iran is always in sight, very rarely are the real responsible found, let alone punished.”

The specialist believes that the MOIS, the IRGC and Iranian regime supreme leader Ali Khamenei himself were behind the attack.

The terrorist couple confessed that they got their orders from Assadi, “a top agent of Iran’s MOIS.”

On the international stage, behind the scenes, Iran is exerting pressure to release their “diplomat” quickly. “Something Unthinkable.” Assadi will be trialed.

Asadollah Assadi, head of the mullahs’ intelligence at the Iranian regime’s embassy in Vienna and the liaison of terrorists in Germany is among those arrested.

According to a joint statement by the Belgian federal prosecutor and the federal intelligence and security agency, a terrorist couple affiliated with the Iranian regime who were commissioned to commit a terrorist attack against the grand gathering of the Iranian Resistance in Paris on June 30, 2018, were arrested in Belgium, and the judge issued an arrest warrant against them.

According to the statement, they were found carrying about 500 grams of TATP material and a detonator in a women’s makeup briefcase. According to this statement, a person suspected of complicity with the two aforementioned individuals was simultaneously arrested in France. The statement adds that an Iranian diplomat from the Iranian regime’s embassy in Vienna, who was the liaison with the arrested terrorists, was also arrested in Germany.

1. The couple who were arrested in a Mercedes-Benz in the city of Antwerp, Belgium, was Amir Sadouni (38) and Nasim Naami (34), who pretended to be supporters of the PMOI. They had Belgian citizenship.

Amir Sadouni worked in a shipping company operating between the Netherlands and Belgium and secretly traveled to Iran. Nasim Naami went to Belgium from Iran in 2009 and married Sadouni.

2. The diplomat-terrorist arrested in Germany is Asadollah Assadi (47), who has been the head of the Iranian regime’s intelligence station at the regime’s embassy in Vienna since 2014. He had given the final order to the terrorists to attack the June 30th gathering. Asadollah Assadi had replaced the regime’s other diplomat-terrorist by the name of Mostafa Roudaki. Mostafa Roudaki went to Tehran from Austria and was dispatched to Albania in 2017 as the first secretary of the embassy in order to pursue espionage and terrorist activities against the PMOI. In order to facilitate Roudaki’s activities, the Habilian Center and Dideban Association, two branches of the Ministry of Intelligence (MOIS), became active in Albania under the guise of cultural and press activities.

3. The person who has been arrested in France on suspicion of complicity with the terrorists is Mehrdad Arefani (55 years old). His wife, who has separated from him, was linked to an intelligence officer in Iran.

4. The Belgian police have inspected five other places in different parts of Belgium, but the results have not been disclosed yet due to security reasons.

The demands of the Iranian people and Resistance

The European intelligence organizations, in their annual reports, have consistently emphasized that the PMOI and the National Council of Resistance of Iran are the main targets of the Ministry of Intelligence and the terrorist Quds Force. Following the regime’s terrorist attacks in Europe, the European Union on April 29, 1997, ordered the mullahs’ mercenaries and intelligence and security agents to be expelled from the Member States and not allowed to enter any of these countries.