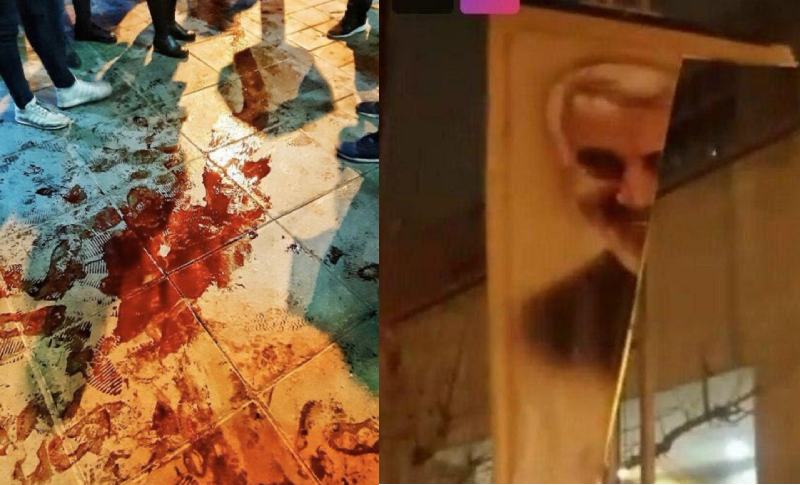 The Iranian people, particularly young people and women are tearing down and burning images of the regime’s criminal mastermind Qassem Soleimani, who was taken out in a US drone strike on January 3.

Posters of the former leader of the regime’s terrorist Quds Force, dubbed a “child-killer” by the people of Iran and the Middle East, are being burned every day by the Iranian opposition People’s Mojahedin Organization of Iran (PMOI/MEK) and their Resistance Units.

This sends a clear message to the regime, which is already facing several domestic and international crises, about how the Iranian people despise the regime as a whole and are determined to overthrow the mullahs once and for all.

In Behbahan, young people used what appeared to be a firebomb or powerful sound grenade to attack a site of the regime’s repressive forces. This represents a major security breach and showcases how vulnerable these sites are, something that should strike fear into the mullahs.

In Eslamshahr, a city that saw major protests during the November uprising, people set fire to a large propaganda poster of Soleimani. During the uprising there, people torched numerous regime-linked institutions and the regime’s security forces opened fire and killed many.

Ordinary Iranians have learned from this and are courageously tearing down images of Soleimani, something they’ve been doing for over a week, in order to prove that the Iranian people hate this mass murderer.

Of course, it’s important to remember that any support for the MEK inside Iran means that you could face the death sentence under the regime’s barbaric laws that bar any support or membership of the MEK.

Amnesty International reports that, back in June 2014, MEK supporter Gholamreza Khosravi Savadjani was executed for donating a small amount of money to the opposition satellite TV network, Sima-ye Azadi (Voice of Freedom or INTV) which also broadcast the MEK’s activities. Amnesty wrote that Khosravi was arrested in 2008 in Rafsanjan, Kerman Province, for his alleged support of the INTV