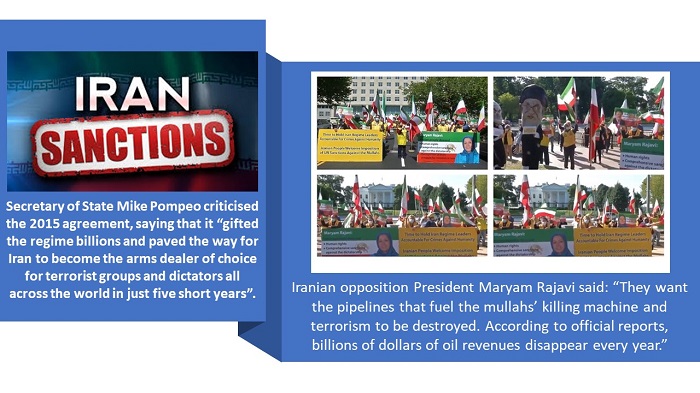 The United States activated the sanctions snapback mechanism in the 2015 Iran nuclear deal, citing Iran’s constant violations of the agreement and its other illicit activities, on Monday.

The Secretaries of State, Defence, and Treasury announced in a joint press conference the imposition of new sanctions and an Executive Order by Donald Trump regarding the reimposition of all sanctions.

Secretary of State Mike Pompeo criticized the 2015 agreement, saying that it “gifted the regime billions and paved the way for Iran to become the arms dealer of choice for terrorist groups and dictators all across the world in just five short years”.

Action should now be taken by the U.N. and all responsible governments against a regime that in 1988 organized the slaughter of 30,000 political prisoners, most of them members or supporters of the (#PMOI / #MEK #Iran). https://t.co/8MFsNJxQdn pic.twitter.com/m9dR8y83bt

What has changed since the regime was last under these sanctions?

All of this shows that sanctions will be quite different this time around.

On the eve of the UN General Assembly summit and on behalf of the Iranian people and Resistance, I would like to draw the attention of all governments and international bodies to three fundamental issues: #NoImpunity4Mullahs #Iranhttps://t.co/ytJG4tLQhz pic.twitter.com/9Ha0VXtZJn

On Friday, Mrs. Maryam Rajavi the President-elect of the National Council of Resistance of Iran’s (NCRI) said: “As for sanctions, I must reiterate that the people of Iran were attacked and slaughtered last November for protesting against gasoline price hikes. They want the pipelines that fuel the mullahs’ killing machine and terrorism to be destroyed. According to official reports, billions of dollars of oil revenues disappear every year. In other words, they end up in the coffers of Ali Khamenei.”

She said that the international community must “boycott the clerical regime” as this helps fight terrorism, suppression, and corruption.

Iranian American Communities supporters of The People’s Mojahedin Organization of Iran (PMOI / MEK Iran), in the US, rally in front of WhiteHouse, Sept 22, 2020, to support the US’s call on the UN to SnapBack all sanctions on dictators ruling Iran and said EU must follow.

Supporters of the #MEK #Iran held rallies in Washington D.C. and in major cities across Europe to coincide with the U.N. G A speeches being heard. The rallies reiterated their support for sanctions against the #Iranian regime.https://t.co/8MFsNJxQdn pic.twitter.com/st4shR7HHN