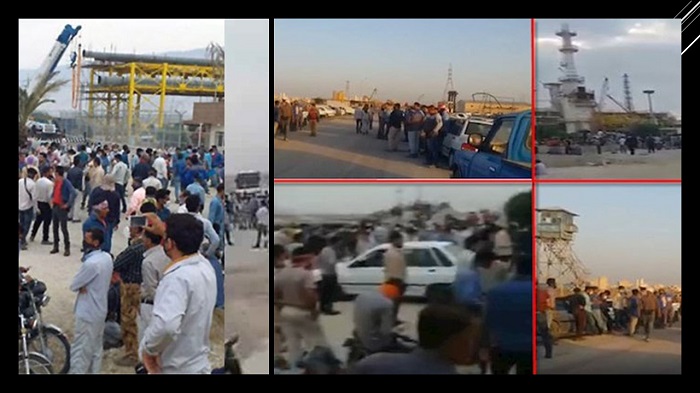 The NCRI Labor Committee appeals to the ILO, Trade Unions, and labor rights advocate to denounce the anti-labor theocratic regime and strengthen support for the Iranian oil employees’ protests and strikes.

Who is on strike?

From last Saturday, August 1st, employees of oil industry facilities which include the following have been on strike:

Why are they on strike?

Aug 4 – Isfahan, central #Iran
Employees and workers of the Isfahan refinery began their strike. Many other such facilities in Iran are also witnessing protests and strikes by their workers.#IranProtestspic.twitter.com/UqQAqqaz4K

Even though the refineries are functioning at full capacity and the products produced are fetching good prices, the workers are not even getting minimum wages.  Also, in November 2019 fuel prices went through the roof when they rose from 1,000 tomans to 3,000 tomans per liter.

The current oil minister, Bijan Zanganeh, wrongfully claimed that the 31,000 billion tomans revenue obtained from price rises would be redistributed amongst the people. This has not happened. A similar promise was made by Mohammad Bagher Nobakht, Rouhani’s deputy and head of the Planning and Budget Organization last November, who said the money would find their way into the hands of heads of household. This has not taken place either. Those workers who toil to produce around 120 million liters of petrol daily received nothing more in their pay packets.

While saluting the workers on strike in the oil facilities and refineries of Khuzestan, Bushehr, Hormozgan, Fars, Isfahan and Ilam, I urge working people across #Iran, particularly the oil workers and workers in other sectors, to rise up in support of them. #Iranprotests

The Labor Committee of the National Council of Resistance of Iran (NCRI), wholeheartedly supports the striking employees of the refineries and oil facilities and requests that every oil worker throughout the country should support the striking workers and help them to win the wages and work conditions that are their rights.