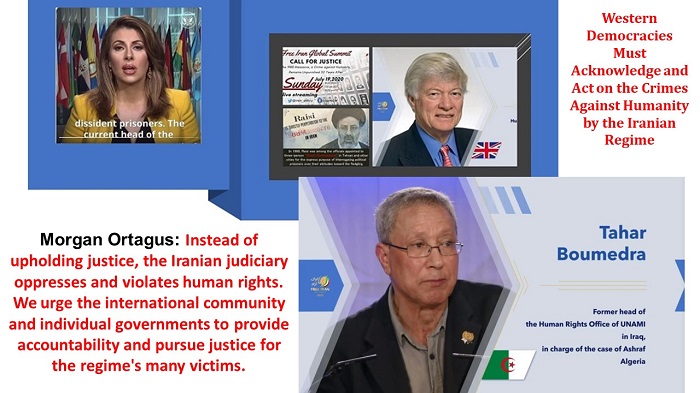 The international community has been called upon to independently investigate the 1988 massacre of 30,000 political prisoners in Iran.

The massacre happened over several months following a fatwa delivered by the then Supreme Leader of Iran, Ayatollah Khomeini in mid-July, 1988. Most of those secretly slaughtered and later buried in mass graves in the dead of night belonged to the People’s Mojahedin Organization of Iran (PMOI / MEK Iran).

The United Nations, to its lasting shame, did nothing about the massacre, even though it was given convincing information about the executions, including evidence presented to it by Amnesty International.

Later on, in 1988, a tape recording of a discussion about the executions amongst top officials was discovered and released to the U.N., which still refused to act.

Top officials who were involved in that very discussion are now an important part of the regime. Ebrahim Raisi, for example, is the Judiciary Chief while the regime’s Justice Minister is Alireza Avaie. The U.N.’s silence has bred complacency and smugness in Tehran.

A group of human rights lawyers formed a London-based NGO called the Justice for the Victims of the 1988 Massacre in Iran (JVMI). It is determined to seek justice for the families of those slaughtered in Iran in 1988.

Tahar Boumedra, a former chief of the Human Rights Office of the United Nations Assistance Mission for Iraq (UNAMI) and a legal expert, says that many survivors of the massacre have been interviewed and photographs of the mass graves have been obtained and sent onto the U.N. in vain.

Boumedra says that despite U.N. officials promising to look into the massacre, they have not done so. It seems that the U.N. is afraid of upsetting the regime.

Because of this inability or unwillingness on the part of the U.N. to act, the responsibility falls on individual western governments to investigate what happened back then and then hold those who organized the massacre and carried out accountable for their criminal actions.

Amnesty International and the JVMI have both contributed reports made into the massacre. The latest investigation was in 2018 b Amnesty International. They concluded that Khomeini carried out the slaughter after being forced to accept the U.N. brokered ceasefire in the Iran-Iraq War.

The Special Rapporteur on the Iranian human rights situation gave a report to the U.N. in2017in which he said: “over the years, a high number of reports have been issued about the 1988 massacres. If the number of persons who disappeared and were executed can be disputed, overwhelming evidence shows that thousands of persons were summarily killed.”

Former U.N. judge, Geoffrey Robertson QC, described the massacre as one of the “worst crimes against humanity since the concentration camps of the Second World War” while attending the July 19th Free Iran Global Summit organized by the NCRI.

The statute of limitations does not apply to crimes against humanity. This particular crime may seem as if it happened a long time ago, but the perpetrators can still be prosecuted by the ICC. The original fatwa handed down by Khomeini has never been lifted against the MEK.

The Iranian government still has some of those original mass murderers occupying key positions. Some of the survivors of the massacre are still alive as are some of the family members of those killed. Evidence is available. It’s up to the western democracies to step up and demand justice through the international criminal court.