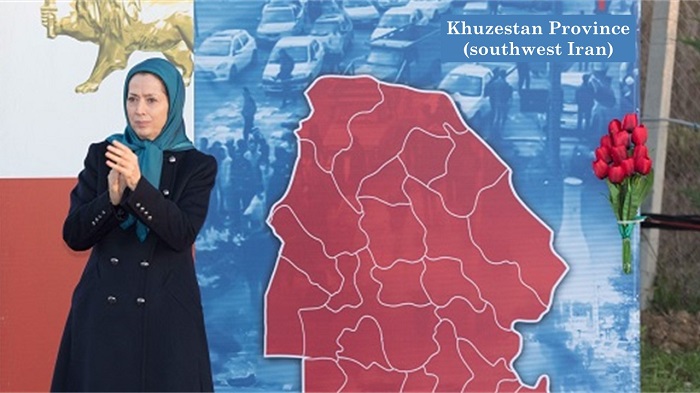 The National Council of Resistance of Iran (NCRI), and the People’s Mujahedin of Iran (PMOI / MEK Iran), reported the uprising in Ahvaz, Susangerd, Shush, and other cities of Khuzestan in protest to water shortage enters the fourth day.

The widespread protests and uprisings in different cities of Khuzestan Province (southwest Iran) that started on Thursday night due to water shortage, continued on Friday and Saturday, Sunday nights. The protesters and the defiant youth in Ahvaz and surrounding towns closed transit highways.

Despite the dispatch of the anti-riot State Security Force (SSF) units by the mullahs’ regime, the uprising of the people of Khuzestan in protest to the lack of water continued on Sunday night, July 18, for the fourth consecutive night.

The defiant youths resisted the heavily armed SSF while chanting, “We will not accept humiliation,” and “People demand regime change.” in Susangerd.

The SSF special anti-riot units tried to disperse the demonstrators by firing tear gas and pepper spray, firing bird shots, and directly targeting the defenseless protesters, which wounded many people. However, the youths resisted them by throwing rocks while chanting anti-regime slogans.

Demonstrators surrounded the governor’s office in Shush. Terrified of the growing anger of the demonstrators, the SSF retreated into the building and closed the gate.

The defiant youths set fire at the main Ahvaz-Shush highway in the Al-Baji area north of Ahvaz and the main road in the Malashiah area south of the city. In Khorramshahr (southwest Khuzestan), to prevent the spread of protests, regime security forces set up checkpoints at the entrance to the city and arrested youths and protesters.

Mrs. Maryam Rajavi, the President-elect of the National Council of Resistance of Iran (NCRI), saluted the arisen people of Ahvaz and Khuzestan Province who, in dire need of water and freedom, has come to the streets and chant ‘we will not accept humiliation.’

Mrs. Rajavi called on all youths to rush to the aid of the people of Khuzestan, especially those wounded. She said that opening fire on unarmed residents and the martyrdom of a young man in Shadegan again demonstrated that as long as the plundering mullahs remain in power, poverty, unemployment, and disease will continue.

The mullahs deny the people water, power, bread, housing, and vaccines to provide for the unpatriotic nuclear and missile projects and their warmongering in the region.