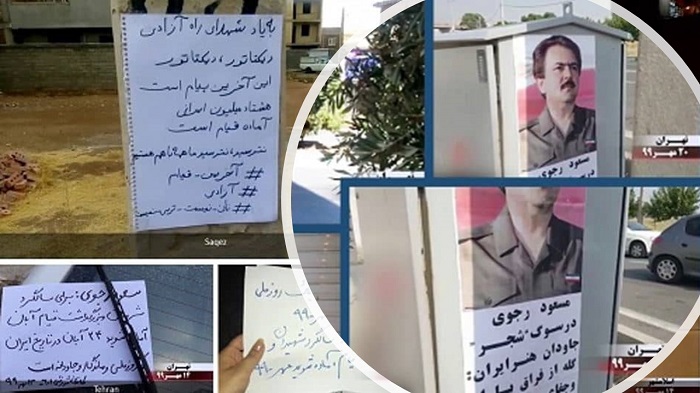 The MEK Resistance Units and MEK supporters spread graffiti and went around posting leaflets and placards in several cities across Iran after the passing of Iran’s iconic maestro, Mohammad Reza Shajarian.

He united with the Iranian people and chanted “Death to the dictator” at the 2009 uprising. Mrs. Maryam Rajavi, the President-elect of the National Council of Resistance of Iran (NCRI), had asked for a week to be set aside commemorating this legendary vocalist. This was in defiance of the regime stopping people from going to his funeral.

The clerical regime prevented the people of #Iran from participating in the funeral and memorial ceremony for Maestro #Shajarian. We will continue to commemorate this eternal voice, paying tribute to him until the seventh night (after his demise).https://t.co/YRlvTT3UK4 pic.twitter.com/oAujU0fdfk

The People’s Mojahedin Organization of Iran (PMOI / MEK Iran), supporters went about writing slogans that rejected the dictatorships of both the Shah and Khamenei and called for the criminal IRGC to be disbanded.

#Iran has been mourning the death of musician, singer, and regime critic Mohammad Reza #Shajarian. Recent events have further expose the regime's inhuman nature & the people’s rage toward their rulers.

They also highlighted the people’s demand for overthrowing the inhuman regime. These events took place in Tehran and some other cities which included:

Tehran – Activities of the supporters of the #MEK following the passing of #Iran’s national artist: “Massoud Rajavi: In memory of Shajarian, who will always remain in our memories… We will always remember his most moving message, ‘death to the dictator’https://t.co/IYw9kUaHkL

The slogans that were posted were banners or graffiti placed in public places and included: