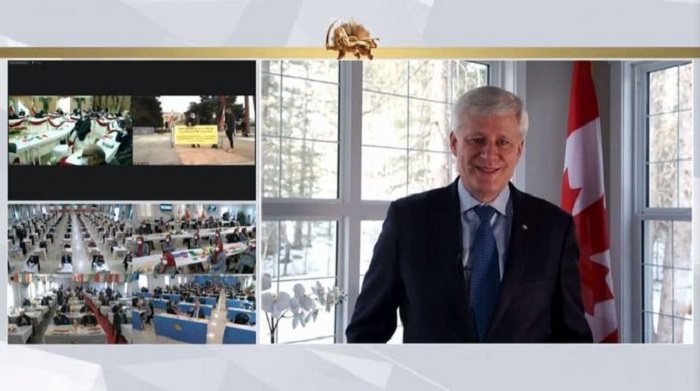 The three-day Free Iran World Summit-2021 began on Saturday, July 10, with the involvement of Iranians and resistance supporters from more than 50,000 places in 105 countries, as well as the presence of thousands of members of the People’s Mujahedin of Iran (PMOI / MEK Iran), at Ashraf 3 in Albania. Participants convened online with a 20-hour time difference from all around the world.

Stephen Harper, Prime Minister of Canada (2006-2015) spoke out in support of the Iranian people condemning the mullah’s elections and criticizing the installation of human rights abuser, Ebrahim Raisi as the next Iranian president.

Ebrahim Raisi is a criminal

“Ebrahim Raisi is a criminal, guilty of crimes against humanity. He is a living symbol of the folly of trying to appease the Ayatollah’s regime.

Shame on any government in the world that would sit down and try to negotiate anything with an administration led by him.”

Mr. Harper said. “Raisi is the very person whom the regime has long entrusted to jail or kill anyone who is actually moderate… For these actions, he rocketed up the chain of command in the regime, becoming before his selection as president, the Ayatollah’s Chief Justice.”

Raisi was named Chief of the Judiciary by Iran’s Supreme Leader, Ali Khamenei, in March 2019. Raisi’s history of assassinating democratic activists has only become worse since then. Raisi oversaw the executions of 251 individuals in 2019, 267 people in 2020, and the figure continues to rise.

Raisi was one of four officials chosen by Supreme Leader Khomeini to carry out his infamous fatwa to slaughter imprisoned activists linked with the main democratic opposition in 1988 as deputy prosecutor of Tehran. As a result, during the massacre, thirty thousand political detainees, predominantly MEK members, were ruthlessly killed in a matter of months.

The illusion of democracy

Mr. Harper went on to dismiss the illusion of democracy that the mullahs try to portray with their game of ‘reformists’ vs ‘hard-liners’.

“One of the biggest lies is that the regime possesses some mysterious faction of so-called moderates…Year after year, we’ve been told that if we handle the regime with kid gloves, we strengthen the position of these so-called moderates and that this will allow them to rise in the regime, and to change its course.” he continued.

Raisi’s appointment was made out of desperation by Ali Khamenei, the Supreme Leader. He needed to close ranks in order to safeguard his administration from escalating crises and mass protests.

Raisi represents Khamenei’s last-ditch effort to reorganize and establish fresh lines of defense against the Iranian people and their uprisings for democracy.

“I believe that the regime is, in fact, weakening. That the selection of an open and bloodstained extremist as president, portrays a regime so worried about its survival, that it dares not risk any shadow of deviation from the Ayatollah’s extremist direction,” he added.

Raisi should be prosecuted for crimes against humanity as soon as possible and the international community should follow Mr. Harper’s advice to offer the oppressed Iranian people their complete support.