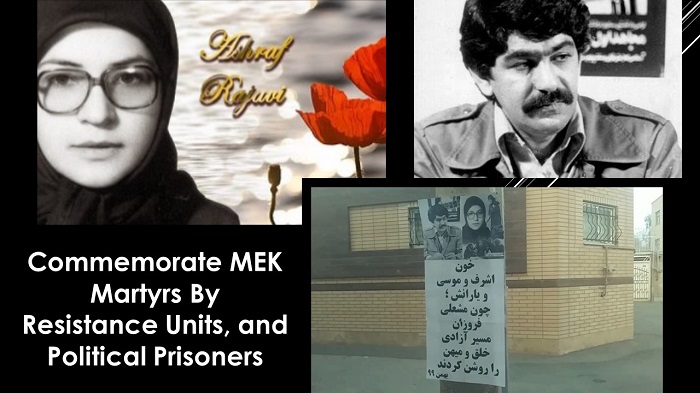 The network of the People’s Mojahedin Organization of Iran (PMOI / MEK Iran) inside Iran, known as the MEK Resistance Units, organized activities commemorating leaders of the MEK, Mousa Khiabani, and Ashraf Rajavi, killed by the Revolutionary Guards (IRGC) on February 8, 1981.

Over the past few weeks, there have been organized activities in different parts of Tehran, and cities across Iran such as Isfahan, Mashhad, Shiraz, Tabriz, Karaj, Urmia, Lahijan, Neyshabur, Malekan, Bonab, Lahijan, Borujerd, Kerman, Qazvin, Kuhdasht, Shahre Kord, and Rasht.

Supporters of (PMOI / MEK Iran) installed, posters and images of the Iranian Resistance leader Massoud Rajavi and NCRI President-elect Maryam Rajavi, marking the memory of the martyrs fallen in February 1981.

“Ashraf and Moussa are immortal and unforgettable heroes for the Iranian people,”

“Hail to Ashraf and Mousa and their brave companions.”

The MEK Resistance Units also spread handwritten slogans in various places that read: “We’ll continue the path of Ashraf and Mousa until the regime’s collapse.

Their blood is our torch in this way,”

“Ali Khamenei will be overthrown,” and

“Ashraf and Mousa are alive in our hearts inspiring the young generation with the highest motivations.”

A member of MEK Resistance Units also bravely visited the place where Ashraf and Moussa were assassinated.

“Here is where on February 8, 1981, (PMOI / MEK Iran) leaders, Moussa Khiabani and Ashraf Rajavi were killed.

We are here to commemorate this day on behalf of all Resistance Units and Massoud and Maryam Rajavi,” he said.

A group of female political prisoners supporters of the (PMOI / MEK Iran) in Evin prison commemorated Ashraf and Moussa, published a statement.

The political prisoners in their statement they wrote:

“The blood of Ashraf and Moussa flowed from the streets and alleys of Tehran in the heart of history. This path continued by 30,000 executed political prisoners in 1988, and later in protests of brave uprisings of 2018 and 2019,” their statement read.

The statement also addressed that no matter how much the regime killed and imprisoned and terrorized it failed to destroy the (PMOI / MEK Iran).

A group of (PMOI / MEK Iran) supporters imprisoned in Rajai Shahr prison of Karaj in their statement pledge to continue the path of those fallen for freedom.

“On February 8, 1981, many prisoners paid their respect and tribute to the bodies of Ashraf and Moussa and other martyrs at the cost of their own life. The regime executed the day after hundreds of prisoners who refused to disrespect the bodies of the martyrs,” their statement said.

The Rajai Shahr political prisoners also emphasized that these martyrs are still an inspiring source of motivation for the members of the MEK Resistance Units and those struggling for freedom across Iran.

Also in other prisons such as Gohardasht Karaj and Urmia prison, the political prisoners commemorated the two epic MEK leaders, Ashraf and Moussa.

#Song
"Do you remember?"
I extend my best regards & tributes to the martyrs of the #PMOI Mousa Khiabani & Ashraf Rajavi and 18 other #MEK members who fell down in the battle against the mullahs' guards on February 8, 1982.#FreeIran2020 #Iranpic.twitter.com/YUeei99PDb