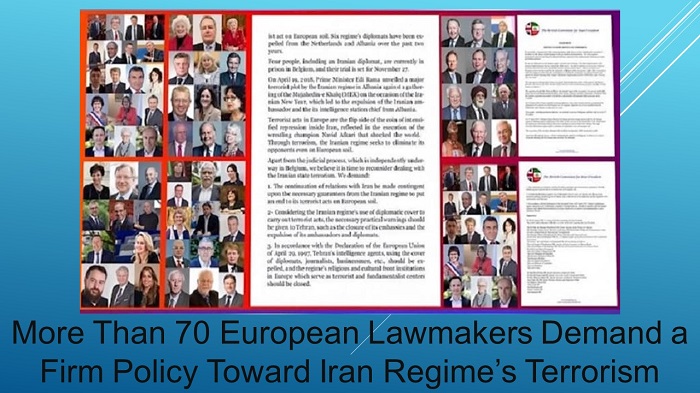 In a joint statement, more than 70 European lawmakers called for a firm policy towards the Iranian regime and its terrorist activities to be adopted. The lawmakers expressed their concern about the human rights situation in the country, in particular the treatment of political prisoners and detained protesters, supporters of the People’s Mojahedin Organization of Iran (PMOI / MEK Iran). They emphasized that Amnesty International has also raised its concerns about the situation and said that international attention is warranted.

Their statement highlighted that the Iranian regime plotted to carry out a terrorist attack at the Iranian Resistance’s, the National Council of Resistance of Iran’s (NCRI), and the People’s Mojahedin Organization of Iran (PMOI / MEK Iran), annual Free Iran gathering just outside Paris in 2018.

They emphasized that the Iranian regime’s terrorism and belligerence know no boundaries and that it cannot be allowed to continue plotting on European soil.

The lawmakers also mentioned the case of Assadollah Assadi, a senior Iranian diplomat who was posted at the regime’s embassy in Vienna. He has been charged in relation to the foiled Paris 2018 plot against the regime’s opposition NCRI and (PMOI / MEK Iran), and it has been established that he is a full-time employee of the Ministry of Intelligence in Iran (MOIS).

Had the terrorist attack gone ahead, there could have been hundreds, if not thousands, of casualties. Every year, there are tens of thousands of participants including a large number of political figures, dignitaries and religious figures, members of parliament, and so on from around the world, including Europe and North America.

The lawmakers recognized that the leader of the opposition – Mrs. Maryam Rajavi – was the target of the conspiracy. They also highlighted that this is not the only terrorist plot the regime has been working towards on European soil. In April 2018, the Prime Minister of Albania unveiled a terrorist plot against the MEK residing in Albania. The regime was planning to attack the members of the opposition during a Persian New Year gathering.

Albanian Prime Minister Edi Rama ensured on Wednesday that #Albania will not change its approach to the People's Mojahedin Organization of #Iran, saying their sheltering has been provided as a humanitarian operation.#MEK pic.twitter.com/76kTBgxvx7

In their statement, the lawmakers had a number of suggestions on how to deal with the Iranian regime. They suggested that the “continuation of relations with Iran be made contingent upon the necessary guarantees from the Iranian regime to put an end to its terrorist acts on European soil”.

#Albania said on Wednesday that it had expelled two #Iranian diplomats from the countryhttps://t.co/hRrHksyEud#Iran #IranProtests #MEK @USAdarFarsi pic.twitter.com/bXVI8N3chn

They also drew attention to the regime’s use of its embassies and diplomats to carry out terrorist planning. The “necessary practical warnings” should be given to the Iranian government and they advised that the embassies are closed and that diplomats and ambassadors are expelled from the respective countries.

Their final suggestion was that “Tehran’s intelligence agents, using the cover of diplomats, journalists, businessmen, etc., should be expelled, and the regime’s religious and cultural front institutions in Europe which serve as terrorist and fundamentalist centers should be closed” in accordance with the Declaration of the European Union of 29 April 1997.

The Iranian regime’s terrorist activities are becoming more and more brazen as the regime enjoys impunity and relative silence with regard to its crimes. It is essential that the Iranian regime is held accountable and that the international community makes it understand that its belligerence will not be tolerated.