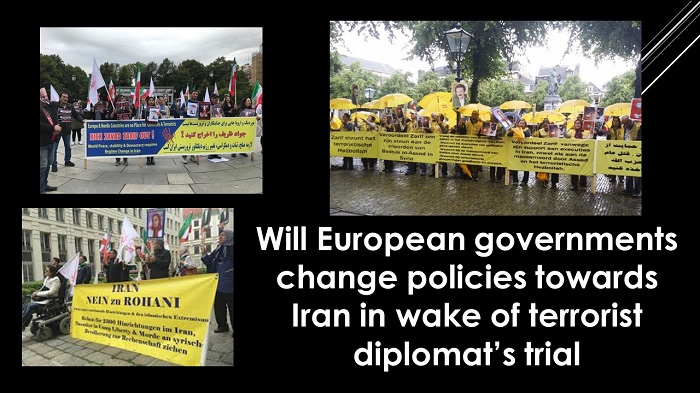 European and world history is full of mistakes and blunders by governments. Arguably one of the worst mistakes in the twentieth century was to appease Adolf Hitler and the Nazis. The policy of appeasement led to the occupation of Poland, France, and beyond and as a result, the world went to war.

It seems as if European governments haven’t learned from history as they have now been appeasing Iran’s dictatorship. The result is that the mullahs in power think they can get away with whatever they want and dispense with any pretense of human rights at home.

The latest evidence of the results of appeasing the regime in Iran is the attempt to assassinate the leaders and supporters of the Iranian resistance movement the National Council of Resistance of Iran (NCRI) and the  People’s Mojahedin Organization of Iran (PMOI / MEK Iran), with a bomb attack in Villepinte, near Paris in 2018. This was fortunately blocked before it could do any damage, but the point is that it took place in the heart of Europe. Iran’s leaders are still denying that they had anything to do with it, a blatant lie.

Assadollah Assadi, the main criminal element in the bomb attempt was an agent of the Iranian government, an Iranian diplomat based in Vienna. He was lulled into a false sense of security because of Europe’s lax attitude towards the regime and thought that his diplomatic posting would prevent him from being tried.

Assadi has now been on trial in Belgium together with his three accomplices, all with the previous association, lie Assadi, with Iran’s Ministry of Intelligence and Security (MOIS) a ministry well versed in organizing espionage and terrorism.

It is quite likely that the four defendants will be convicted of terrorism offenses and spend long periods in a Belgian prison, but the real question is whether the E.U. will have learned anything from the whole incident.

The link between the bomb attack and the Iranian government is patently obvious and this certainly hasn’t passed by the Belgian prosecutors’ attention. The prosecutor has already stated that the attack must have been organized and controlled from Tehran. It wasn’t a one-off attack dreamt up by an alone, mad individual.

The decision to attack the Free Iran Rally in June 2018 must have been made by the Supreme National Security Council, according to the National Council of Resistance of Iran (NCRI). This means that the decision to attack the rally must have been known, probably organized by, at least the regime’s president, Hassan Rouhani, and the Foreign Affairs Minister, Javad Zarif.

Assadi and his helpers were caught red-handed, but the real criminals are in Tehran. Zarif even tried to claim that the bomb attack had been planned by disaffected members of the Iranian Resistance. Zarif is up to his neck in it and has tried to deliberately lie to the international community.

Nonetheless, this link hasn’t yet filtered through to the leaders of the E.U. who still think they can negotiate with the regime in Iran and consider Zarif as a “moderate.” The EU foreign policy chief, Josep Borrell, had arranged to meet with Zarif in Tehran at the Europe-Iran Business Forum until news came through that a French Iranian resident, Ruhollah Zam was executed in Iran. The meeting was canceled but it is too soon to know whether this signals a change in EU policy towards Iran or not.

Hitler’s forces swept out of Germany in their quest to conquer Europe not long after the British Prime Minister, Neville Chamberlain, had met with Hitler and declared that he had secured “peace for our time.” Later on, during the Second World War, Winston Churchill remarked that “An appeaser is one who feeds a crocodile, hoping it will eat him last.”

It seems that the EU hasn’t yet worked out that appeasing the mullahs could lead to their people being “eaten” by the Iranian crocodile due to the policy of appeasement.

The EU should pursue a more aggressive attitude towards Iran, close down its embassies and diplomatic missions which are serving as bases for espionage and terrorism against the regime’s perceived enemies. This is a surer way of securing “peace in our time.”