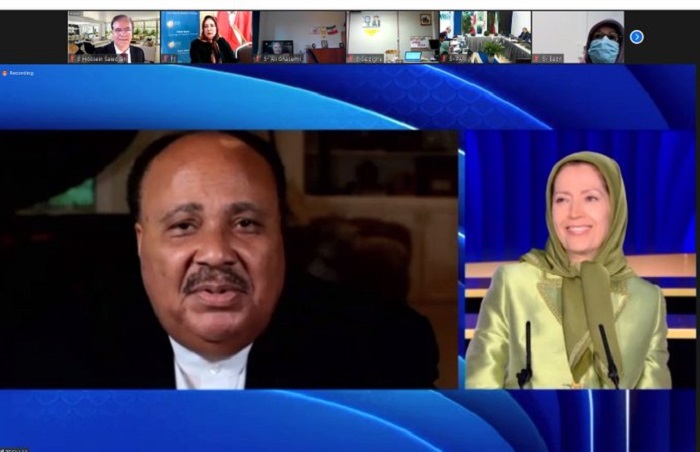 On July 10, Martin Luther King III delivered a speech at the Free Iran World Summit, in support of the Iranian people’s ongoing battle for freedom, democracy, and human rights.

The Free Iran 2021 World Summit commenced with the participation of Iranians and supporters of the resistance from more than 50,000 locations in 105 countries. The presence of thousands members of the People’s Mujahedin of Iran (PMOI / MEK Iran), at Ashraf 3 in Albania was led by president-elect Maryam Rajavi who was the key speaker. From Sydney to Hawaii, participants gathered online with a 20-hour time difference.

Recently, Congressman Tom McClintock of California addressed an announcement by 249 members of the United States House of Representatives.

They expressed the advocacy for the Iranian people’s struggle for a democratic nation, as well as condemnation of the Iranian government’s human rights crimes and state-sponsored terrorism.

King went onto express his support for the US resolution, “I wholeheartedly support legislation in the U.S. Congress to promote freedom and human rights in Iran.

House Resolution 118, which expresses the Iranian people’s desire for a democratic, secular, and non-nuclear republic of Iran, also condemns violations of human rights and state-sponsored terrorism by the Iranian government.”

In his speech, King also expressed support for Mrs. Rajavi’s 10 Point Plan for the future of Iran, which calls for a democratic, peace-seeking, and non-nuclear republic based on separation of church and state and peaceful co-existence with its neighbors.

“I strongly support the ten-point plan for Iran’s future, developed by Maryam Rajavi and other leaders who are resisting the dictatorship in Iran. The stated goals of this plan include genuine democracy and self-determination for all Iranians; freedom of speech and association; ending the death penalty; religious freedom for all Iranians; eradicating discrimination based on gender; establishing an independent judicial system and compliance with the universal declaration of human rights; equal employment opportunities; an end to the development of nuclear weapons and all weapons of mass destruction; and a commitment to peaceful coexistence.” King added.

On June 19, Iran’s manipulated presidential election came to a conclusion and the Iranian people boycotted the charade, demonstrating their desire for regime change.

Ebrahim Raisi’s proclamation as the next Iranian regime president was a key topic discussed at the event. Raisi is a protégé of Khamenei and owes his political career to him. He passed the ultimate test of loyalty in 1988, only a few years after entering the state’s judiciary.

Raisi was a key figure of the Death Commission which oversaw the massacre of at least 30,000 political prisoners across Iran, mainly members of the MEK, “We urge the UN Security Council to arrange for the international prosecution of Mullah Raisi and holding him accountable for crimes against humanity, and to refuse to accept his presence at the next session of the UN General Assembly,” Rajavi said expressing the urgency to bring Raisi to justice.

Struggle for a democratic-free Iran

While the Iranian people have suffered greatly at the hands of the regime, they continue in their struggle for a democratic-free Iran.

“Despite the terrible legacy of oppression that the Iranian people have suffered for so many years, I have tremendous confidence that their freedom struggle will prevail. The people of Iran will prevail because their cause is just, their courage is strong and their vision of a better society is a powerful moral force for democracy and human rights.” King concluded.