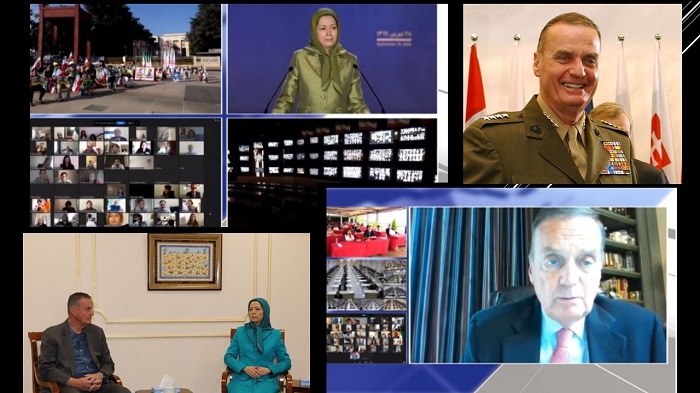 Gen. James Jones, at the Trans-Atlantic summit which brought together Iranians in various countries around the world from 10,000 locations, It was hosted from Ashraf 3 in Albania, the home to 3,000 members of the People’s Mojahedin Organization of Iran (PMOI / MEK) – the main opposition to the Iranian regime.

Gen. James Jones, said he valued Mrs. Maryam Rajavi the President-elect of the National Council of Resistance of Iran’s (NCRI)’s leadership. When referring to her ten Point Plan for Future Iran, he said they were Jeffersonian and should be in place in today’s Iran.

Apart from Gen. James Jones, there were other key people attending the summit, such as 30 bipartisan United States lawmakers. They included the following:

Mrs. Maryam Rajavi, the President-elect of the National Council of Resistance of Iran (NCRI) who deplored the treatment of Navid Afkari. She said “Faced with executions and massacres, the people of Iran urge the United Nations, and the U.N. Security Council, in particular, to restore snapback sanctions stipulated in the six U.N. resolutions against the clerical regime in Iran. Otherwise, Khamenei will continue to ravage the nation as his regime’s survival depends on murder and suppression. If Khamenei were to stop executions, he would lose control of the situation, and uprisings simmering in the depths of Iranian society would erupt and overthrow the mullahs’ religious fascism.”

No question to the regime of Iran planning on nuclear destruction weapon https://t.co/gtZg8Jbekr there's been the execution of #NavidAfkari and plot against US Amb. in retaliation of Qassem Soleimani, who was leading regime's terrorism

Many of the summit’s speakers are asking for justice for more than 30,000 (PMOI / MEK Iran) supporters and other activists who were massacred in 1988. They demanded that the era of appeasement of the Iranian regime should now be brought to an end and those who hold key positions within the regime should now be made to face justice for committing crimes against the people of Iran.

General James Jones, who was the 1st National Security Advisor to President Barack Obama and the former Supreme Allied Commander in Europe, said that it has been 10 years since he first supported the Iranian opposition movement (NCRI and MEK), and during this time he has seen numerous crimes against humanity be conducted by the regime in Iran.

#FreeIran2020
I would like to pay my respects to Mrs. Rajavi and everyone associated with the movement to free #Iran. This is my 10th year involved in this wonderful effort, a wonderful humanitarian effort https://t.co/VbPAUIqNhj

He was quite clear in his belief that Iran exports global terrorism and that they were determined to hold weapons of mass destruction and they did not support freedom and democracy in Iran.

He said that Iran’s judicial system supports the arrest of innocent people while supporting the assassins who murdered them after unfair decisions made by the judiciary. This includes the demise of the young wrestler, Navid Afkari, who was executed after being forced under duress to confess to crimes that he may not have committed. He said there are four key threats to world freedom and they are Iran, China, Russia, and North Korea, who do not promote freedom and democratic values. At the end of his speech, he said he had lived a privileged life and one of the greatest parts of it was supporting the quest for freedom by the Iranian people. He said he hoped very soon to be standing in Iran to celebrate the new leadership of Mrs. Rajavi.