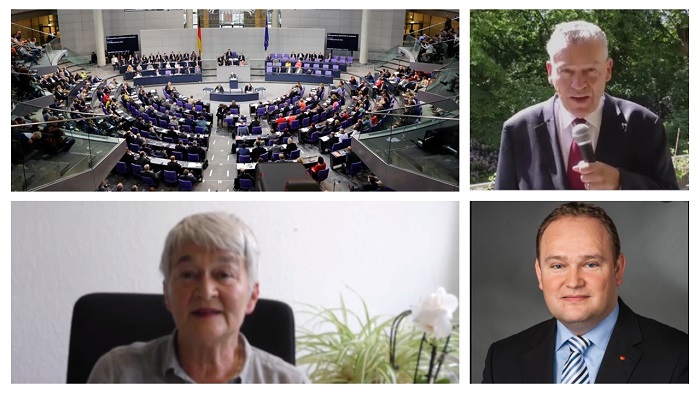 The National Council of Resistance of Iran (NCRI), and the People’s Mujahedin of Iran (PMOI / MEK Iran) reported that the members of the German parliament support the Free Iran World Summit, and condemn human rights violations in Iran.

Otto Bernhard – Former Deputy Minister of Culture and Member of the Board of the German Conrad Adenauer Foundation said: Ebrahim Raisi instead of running the country, as president should be arrested and prosecuted before an international court.

The appointment of Ebrahim Ra’isi, the new president of the mullahs’ regime in Iran, is unbearable for the Iranian people and for the people of the world. The Iranian regime has taken its final and sinister step towards absolute dictatorship and violence. However, we are very close to our goal of achieving freedom.

The appointment of a bloodthirsty judge to the post of the president is a desperate move, which many dictators resort to out of desperation, and this is exactly what Khamenei is now resorting to.

In his positions as the Iranian judiciary, Raisi has committed serious violations of humans rights, including executions of political dissidents, arrests, torture, and death sentences for demonstrators and dissidents.

He should be brought before an international tribunal instead of running the country.

The German Solidarity Committee for a Free Iran has been supporting the Iranian opposition for more than 15 years, and we have repeatedly stated our demands, including sanctions and an end to dialogue with the Iranian regime, in line with those of the opposition.

We need a tougher policy, wider sanctions, and more diplomatic isolation towards the Iranian regime as soon as possible.

All officials of the Iranian regime must stand before the International Court of Justice in The Hague.

At the same time, Western nations must finally take further steps to recognize the National Council of Resistance as a democratic alternative to a free Iran.

Catherina Landgraf – Member of the German Federal ParliamentRaisi is an evil official, so we hope for you, Mrs. Rajavi, to your ten-point plan and your goal to establish a free Iran based on the separation of religion and state and free of nuclear weapons.
I greet all the participants and organizers of the ‘Free Iran’ gathering, in particular, but to Maryam Rajavi, the President-elect of the National Council of Resistance of Iran.

Especially those who are in Ashraf 3 and dedicate their lives to helping others.

I support young girls who are very active and women who bravely fight for equality and self-determination.

Dr. Tim Ostermann member of the German Federal Parliament said Raisi is on the EU-US blacklist for human rights violations. The boycott of the elections by the Iranian people should be seen as a referendum against the Tehran regime.

Ladies and Gentlemen, Dear participants in the Free Iran Rally in Berlin, I sincerely greet all of you. The boycott of the elections by the Iranian people should also be considered as a referendum against the Tehran regime.

The new head of the regime is on both the EU and the US sanctions list for human rights abuses. This should be of great concern to all of us. Germany, Europe, and the international community are hearing the voice of the Iranian people for freedom and democracy.

At the last week’s session of the German Federal Parliament, at the initiative of the Christian Democratic Union / Christian Social Union (CDU / CSU) parliamentary group, we passed a bill condemning widespread restrictions, especially severe human rights violations by the Iranian regime. Human rights must always be at the center of our policy on Iran.

The German Federal Parliament has explicitly stated this: Persistent violations of human and fundamental rights, harassment, persecution of dissidents and brutal repression of civil protests, and the high number of executions shock us.

My support includes participants in civil protests, who bravely take to the streets and demand their basic rights. Resist dictatorships, those who risk their lives for freedom, democracy, separation of religion and state, and the abolition of the death penalty.

On the path to freedom and democracy in Iran, I stand with brave men and women who risk their lives and fearlessly and openly call for an end to religious dictatorship and change for democracy.

I am with those who gather in Berlin. I, along with the entire Christian Democratic Union party, stand by them.