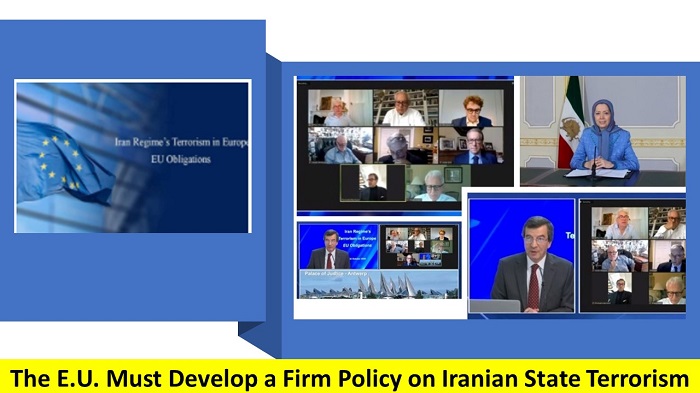 Iran is the leading state-sponsor of terror and this is most evident in the attempted bombing of the 2018 Free Iran rally in Paris by the regime, for which one of its diplomats is now on trial.

The regime’s attack on The National Council of Resistance of Iran’s (NCRI), and the People’s Mojahedin Organization of Iran (PMOI / MEK Iran) rally, which was attended by 100,000 people including hundreds of dignitaries from around the world, was thankfully thwarted by European authorities who arrested diplomat Assadollah Assadi on his way back from hand-delivering the bomb to the terrorists he hired.

No one should think that he might be a rogue agent. He is under the orders of Iranian Foreign Minister Javad Zarif and there is evidence that the bomb plot was conceived and approved at the highest levels of the regime, including President Hassan Rouhani and Supreme Leader Ali Khamenei. After all, the regime has not ever disavowed him, but Assadi has threatened Belgian authorities that if he is found guilty, Europe will face violent reprisals.

This is the first time that an Iranian diplomat has been put on trial for terrorism in Europe, but it will hopefully not be the last. Other acts of terror that the regime conducted on the continent over the past 41 years should be investigated and prosecuted. This includes the 2018 attempted bombing of the Iranian Resistance headquarters in Albania, which actually led to the expulsion of Ambassador Mohammadinia and his First Secretary Roudaki by Albanian Prime Minister Edi Rama, and 2018 attempted assassination of an opposition figure in Denmark.

Le Monde writes of a bomb made with acetone peroxide that was controlled remotely. The Bomb targeted to explode on June 30, 2018 in Villepinte – #Paris
The blast wave could have spread 20 meters and claimed many lives #ExpelIranDiplomatTerroristshttps://t.co/z0gkNpd2QB

The British Committee for Iran freedom held a virtual conference on October 15, chaired by former Scottish MEP Struan Stevenson, where the speakers expressed outrage and called for the closure of Iran’s embassies along with the expulsion of its agents.

.@RogerGodsiff: Terror is the means by which #Iran regime survives and stays in power. It’s how it carries out its policies and counters opposition The least we can do is to stand with the Iranian people and hold the regime to account. #DisbandIRGChttps://t.co/I5FXV7mP73

MP Steve McCabe said: “There are those who argue for appeasement and more dialogue with the regime. It will not help. Iran is the leading sponsor of state terrorism. The only approach is to exclude the regime from the world community.”

Steve McCabe, MP: Iran is the leading sponsor of state terrorism. That’s the problem we’re confronting. The regime does this because first, it is interested in stifling any dissent and making it impossible for people to engage in any form of protests… #MEK #Iran #FreeIran2020 pic.twitter.com/22WTXKyeva

While Stevenson, the Coordinator of the Campaign for Iran Change (CIC), later wrote: “It was the common view of those attending the British Committee for Iran Freedom Conference that if the EU and UK are serious about terminating the Iranian regime’s bomb factories and eliminating their spies, we should close all of Iran’s embassies and expel their diplomatic staff. Khamenei, Rouhani, Zarif, and other leaders of the regime should be indicted for genocide and crimes against humanity and brought to trial in the international courts. The time has come for these arch criminals and murderers to be held to account.”

In June 2018, #Iranian regime foreign minister Mohammad Javad Zarif was responsible for a bombing attempt against the Free Iran rally of the #NCRI. The conspirators, including Assadollah Assadi, a regime diplomat are now on trial in Belgium. #MEK #Iran #FreeIran2020 pic.twitter.com/DwwQOpPiki

Mrs. Maryam Rajavi the President-elect of the National Council of Resistance of Iran’s (NCRI): Suppression at home and export of terrorism and war abroad are the two pillars for the clerical regime’s survival – Message to the conference at the UK House of Commons, “Iranian regime’s terrorism poses threat to global security.

#MaryamRajavi Suppression at home and export of terrorism and war abroad are the two pillars for the clerical regime’s survival – Message to the conference at the UK House of Commons, “Iranian regime’s terrorism poses threat to global security” #Iran #MEK pic.twitter.com/QZpItr9LRs