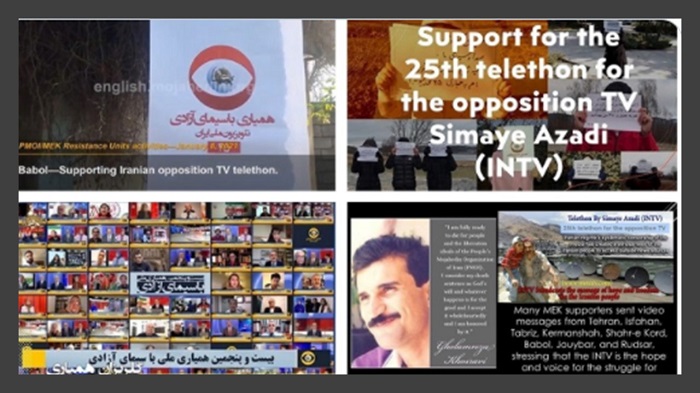 INTV (also called Simay-e Azadi) held its 25th telethon. The National Council of Resistance of Iran (NCRI), and the People’s Mojahedin Organization of Iran (PMOI / MEK Iran), reported that INTV 25th telethon started the last week and ended on Tuesday. INTV is an Iranian opposition satellite channel and its telethon was watched by many Iranians around the world including in Iran. Many took the occasion, waiting hours to be heard, to voice their support for the Iranian Resistance (PMOI / MEK Iran) and everything that it is working towards.

#WeStand4FreeIran
The 25th Telethon for Simay Azadi TV was a galaxy of resilience, force for change and solidarity for a Free Iran pic.twitter.com/BA5IcLMdZz

The channel broadcasts for Europe and is popular with Iranian ex-pats and Iranians in Iran. It has played a major role in the current Coronavirus pandemic, reporting on the reality of the situation.

Iranians showed an overwhelming amount of support for the telethon, especially on social media. More than one hundred telephone lines that were made available were constantly busy.

During the telethon, members of the Resistance Units in Iran called in to be heard – the Resistance Units being the internal network of the People’s Mojahedin Organization of Iran (PMOI / MEK Iran). Defiant young people that have been active in so many recent anti-regime activities also called in, reaffirming their support for the Iranian Resistance and vowing to continue resisting the mullahs and their brutal suppression.

Not only was the telethon filled with hope and optimism, but it was also marked by emotion, with many moving calls from Iranians with stories to tell. Iranians struggling with many personal issues called to say that despite the difficulty they are facing in their lives, they will continue to fight for freedom and democracy in their country.

The people of Iran face many struggles in their lives. Decades of corruption, mismanagement, and suppression have taken their toll and the people are making their discontent known. Economic issues are very prevalent concern in society. Over the years, inflation rates, rising costs of goods, and so on, have pushed more and more people into absolute poverty.

With the arrival of Coronavirus in Iran, all the existing problems were exacerbated and many families are feeling more strain than ever. The desire for regime change is reaching new peaks and the regime is very fearful of another major uprising like the one in November 2019 that almost pushed the regime to collapse.

#WeSupportMEK
Iranian regime had condemned financial support for NCRI & MEK as enmity from God and even punished such act with executions. But yet, there was a galaxy of calls from inside the country, by Resistance Units who are leading active uprising https://t.co/RPBpjlC67E

The telethon is a prime example of people’s desire for change. Analysis from the telethon shows that Iranian expatriates from all over the world are also invested in bringing a brighter future to the people of Iran. Many expatriates donated money, while others vowed to continue doing everything in their power to see the mullahs replaced with a democratic alternative that would respect the people and their human rights.

Increasing international isolation and attention to the regime’s belligerence is mounting and is putting the regime in a precarious situation. It is quickly running out of options and its survival is hanging by a thread.

If international support was given to the people of Iran, the conflicts in the Middle East would be resolved much quicker and the domestic problems would be able to be resolved.

Message on the 25th INTV Telethon, a Symbol of National Solidarity- Support the struggle and uprisings with fervor and enthusiasm. #FreeIranTelethonhttps://t.co/txeuw5m5QL pic.twitter.com/bS77zI6EjD

Mrs. Maryam Rajavi is the President-elect of the National Council of Resistance of Iran’s (NCRI): Message on the 25th INTV Telethon, a Symbol of National Solidarity- Support the struggle and uprisings with fervor and enthusiasm.