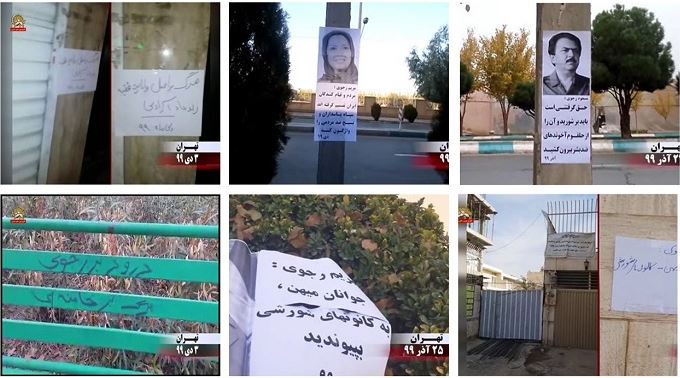 Activities of Resistance Units and (PMOI / MEK Iran) supporters in late December. Uprising, indispensable to victory in the war of destiny with the repressive mullahs’ regime. In late December, MEK Resistance Units, and supporters of the People’s Mojahedin Organization of Iran (PMOI / MEK Iran) posted many placards and wrote graffiti on walls in different across Iranian cities.

These activities took place in:

Some of the slogans written by the MEK Resistance Units were:

“Massoud Rajavi: Disbanding the IRGC is imperative for the Iranian people’s victory,” “Death to Khamenei, hail to Rajavi,”.

“Army of the hungry, onwards uprising and rebellion,”.

“Maryam Rajavi: Freedom and victory are in your hands,” Mrs. Maryam Rajavi is the President-elect of the National Council of Resistance of Iran (NCRI).

“Massoud Rajavi: The people and their valiant, rebellious children will determine the destiny (of our nation),”.

“Rebellion is indispensable to the war of destiny with the mullahs’ regime,”.

“Mullahs must get lost for Coronavirus to go away,”.

“Death to Khamenei, Rouhani, the source of Coronavirus and ruin,”.

“Maryam Rajavi: The Iranian people and Resistance Units will march forward until they finish off the ruling theocracy,” and “Death to the dictator”.