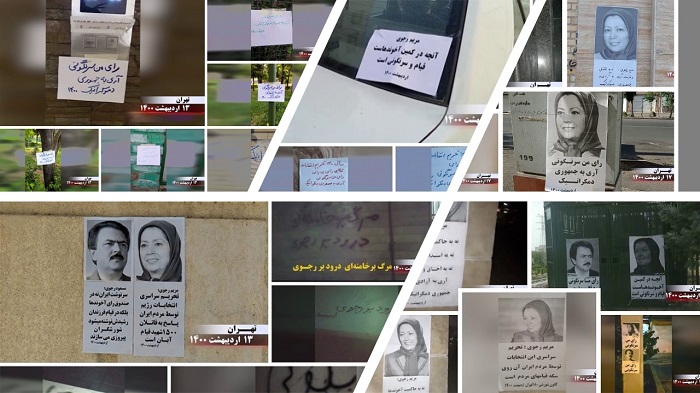 The National Council of Resistance of Iran (NCRI), and the People’s Mujahedin of Iran (PMOI / MEK Iran), reported that the Resistance Units and MEK supporters calling to boycott the regime’s sham election.

Mujahedin-e Khalq (MEK / PMOI Iran) supporters and the Resistance Units called for a boycott of the mullahs’ sham presidential election by installing banners and placards, writing graffiti, and distributing leaflets throughout Iran,

The Resistance Units and MEK supporters slogans were: “Democracy, freedom, with Maryam Rajavi,” “The worker’s vote is regime change in Iran.”

“Boycotting the sham election is a patriotic duty,” “My vote is regime changes, yes to a democratically-elected republic,”

“Maryam Rajavi: No to the rule of the mullahs, no to religious tyranny, no to oppression and plunder, yes to a democratically-elected republic,”

“Maryam Rajavi: nationwide boycott of the election, a response to the murderers of 1,500 martyrs of November 2019 uprising,”

“Maryam Rajavi: A popular uprising is awaiting the mullahs, and will lead to their overthrow,” “Massoud Rajavi: Iran’s destiny to be determined not by the mullahs’ ballot box, but by the uprising of Iran’s valiant children,”

“Massoud Rajavi: Our vote is regime change and the boycott of the sham election,” “We will not vote, hail to Rajavi,” 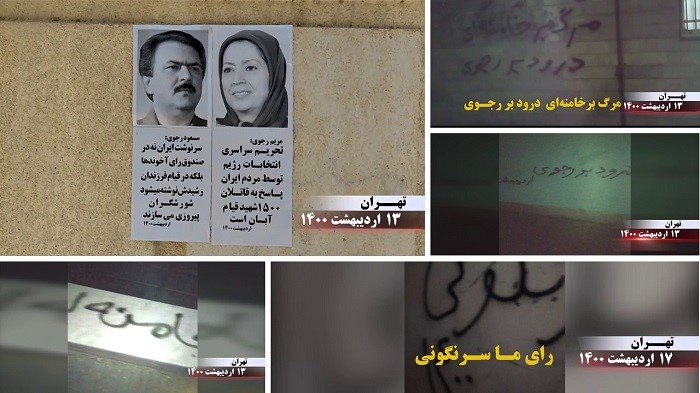 (NCRI) and (PMOI / MEK Iran): Tehran – Activities of the Resistance Units and supporters of the MEK, calling for the boycott of the regime’s sham election – First week of May 2021