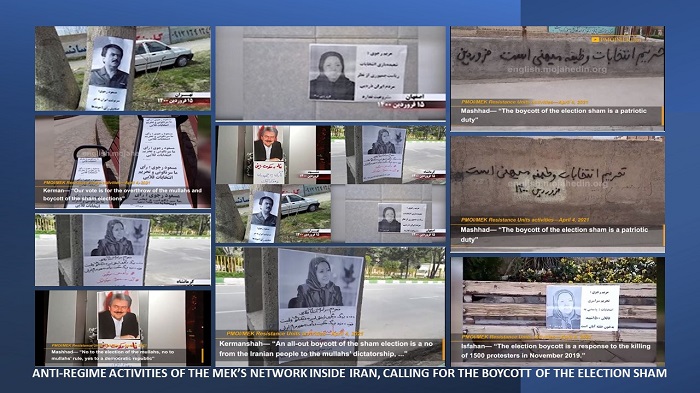 The National Council of Resistance of Iran (NCRI), and the People’s Mujahedin of Iran (PMOI / MEK Iran), reported that the internal network of the MEK organized a vast campaign across Iran calling for the boycott of the regime’s election sham.

Campaigns against the sham presidential elections

Anti-regime activities and campaigns against the regime’s sham presidential elections in June continued by supporters of the MEK across Iran.

The network of the People’s Mojahedin Organization of Iran (PMOI / MEK Iran) inside Iran, known as the MEK Resistance Units, organized a campaign calling for the boycott of the upcoming presidential sham elections.

In various cities, large posters were installed with the slogan, “No to the election of the mullahs, no to mullahs’ rule, yes to a democratic republic.”

Posters of Maryam Rajavi, the President-elect of the National Council of Resistance of Iran (NCRI), and the Iranian Resistance leader Massoud Rajavi were installed with the slogans: “An all-out boycott of the sham election is the Iranian people’s rejection of the mullahs’ dictatorship, our vote is for a democratic republic,”

“The Iranian people’s nationwide boycott of this election is the flip side of popular uprisings,” and

“For the Iranian people, the mullahs’ sham election has no legitimacy.”

“Our vote is to overthrow the mullahs’ regime,”.

“Khamenei must go,” and “We hope for a democratic republic.”

Also, several members of the MEK Resistance Units sent video messages in which they called for the election boycott. “In the new year, we will overcome and overthrow the mullahs. I invite all my compatriots to boycott the sham elections. My vote is to overthrow the mullahs’ regime and yes to a democratic republic,” said a young man from Tehran.

A young woman from Ardabil said in her message: “I’m from Ardabil. It is time to overthrow Khamenei and his corrupt regime.”

“This year we shall overcome and overthrow Khamenei. We hope to see dear Maryam Rajavi in Iran very soon,”.

These activities have increased the regime’s concerns about the growing influence of the MEK among youths.

Recently the regime has arrested many family members and supporters of the MEK and intensified pressure on MEK prisoners.

The regime is extremely terrified of potential protests during the presidential elections and is also concerned with the nationwide boycott of the elections.

During his Nowruz address, Khamenei voiced these concerns and called for more stringent controls on social media platforms to prevent the organization of protests during the election season.