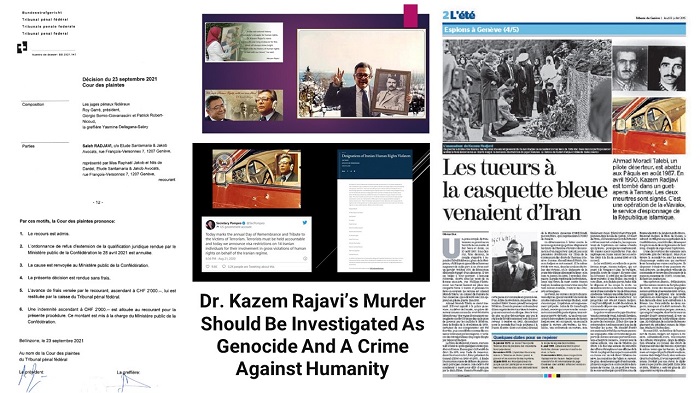 The Swiss Federal Criminal Court ruled on September 23, 2021, to examine the death of Dr. Kazem Rajavi, a representative of the National Council of Resistance of Iran (NCRI) in Switzerland, near Geneva in 1990, not as a case of “murder,” but as “genocide” and a “crime against humanity.”

The federal prosecutor’s office has been instructed to launch an investigation into the offense by a federal criminal court. The court points to the plaintiff’s argument that Professor Rajavi was slain in 1990 as a result of the massacre of 30,000 political prisoners in 1988, more than 90% of the members or supporters of the People’s Mujahedin of Iran (PMOI / MEK Iran), which should be legally classified as genocide and a crime against humanity, according to his logic.

Dr. Rajavi was assassinated by a 13-member commando unit dispatched from Tehran on the direct orders of then-Intelligence Minister Ali Fallahian, who was the subject of an international arrest warrant issued by a Swiss court in 2006.

Dr. Kazem Rajavi’s assassination, as per the Iranian resistance, was “in direct relation with the massacre of thirty thousand political prisoners” carried out in Iran in the second half of 1988 under the cover of the Supreme Leader Khomeini’s fatwa.

The question of Dr. Kazem Rajavi’s assassination in the context of crime against humanity and genocide has been the subject of several legal discussions and bills between the public prosecutor of the canton of Vaud and the public prosecutor of the Confederation, who saw no reason to intervene in the matter and instruct it further, since April 2020.

The case had been treated as a “murder” case by the public prosecutor of the canton of Vaud for 30 years, but cases like genocide and crimes against humanity are the sole jurisdiction of the Confederation’s public prosecutor.

Following these discussions, the case was finally referred to the Federal Criminal Court’s Complaints Division, where it was assessed in February 2021.

According to the court, “for crimes with a historical dimension, such as genocide and crimes against humanity,” the imprescriptibility could be maintained, and the fact that thirty years have passed since the crime was committed will not end the investigation, contrary to the federal prosecution’s opinion.

The elimination of Iranian opponents

“The Public Prosecutor’s Office of the Canton of Vaux has also demonstrated that the elimination of Iranian opponents was being carried out in several European countries.

Assassinations were carried out between 1987 and 1993 in Hamburg, Vienna, Geneva, London, Dubai, and Paris. Fallahijan was placed under an international arrest warrant by the German criminal courts in 1996 for having played a fundamental role in the assassinations of opponents.

Bomb attack at the headquarters of (AMIA)

and by the Argentinian authorities in 2003 for having organized and coordinated a bomb attack at the headquarters of the Argentine Israelite Mutual Association (AMIA) in Buenos Aires. An international arrest warrant was also issued in 2006 against him by the Swiss authorities in the context of the present case.”

The Federal Tribunal thus rejected the Confederation’s public prosecutor’s arguments and ordered that the case be investigated as a case of crimes against humanity and genocide. The court also ordered the prosecution of the confederation to reimburse the NCRI’s court costs.