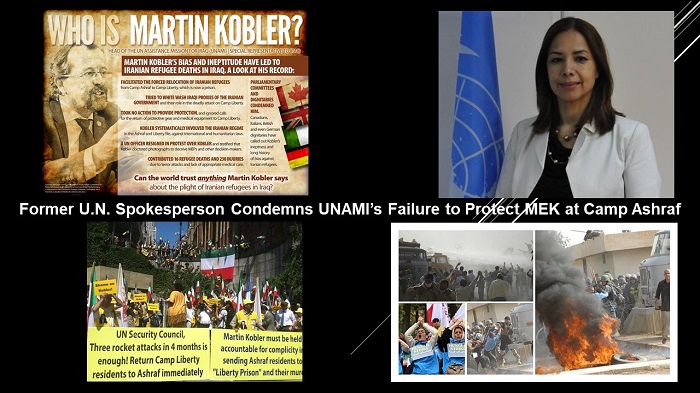 By Jennifer Jones-Kelley: Aicha Elbasr penned an article for The Elephant last week explaining why and when she lost faith in the United Nations. The former spokesperson for the United Nations-African Union Mission in Darfur (UNAMID) described an organization that is riddled with “hypocrisy and immorality” and argued that the U.N. should be dismantled entirely and rebuilt.

Ms. Elbasr recounted key experiences from her time at the U.N. that caused her feelings of disillusionment. In one anecdote, she described the treatment by the U.N. Security Council of the People’s Mojahedin Organization of Iran (PMOI / MEK Iran) members living at Camp Ashraf in Iraq that she witnessed during her time working for the U.N. Assistance Mission for Iraq (UNAMI).

Many listeners and observers who believe in #HumanRights think that the UN is one of the driving forces which help to condemn human rights abuses worldwide and tries to act in the interests of the abused. Aicha Elbasri, not key on the UN agenda https://t.co/vdXmOAjEFX #MEK #Iran pic.twitter.com/CcyiaV5gcA

Ms. Elbasr arrived in Iraq in 2005 to work “with the Iraqi civil society to track and expose human rights violations, promote the freedom of the press, champion women’s, children’s and minorities’ rights and promote good governance.” However, UNAMI staff was routinely “blocked by UNAMI itself.” According to Elbasr, UNAMI was performing a dual and contradictory mission in Iraq: they were both working to improve human rights and freedoms while simultaneously propping up newly-installed Iraqi Prime Minister Nouri al-Maliki, a man known for human rights violations. German diplomat Martin Kobler was chosen in 2011 to lead this mission.

Elbasr wrote that Kobler immediately targeted the MEK after taking office, writing, “Soon after he took office in October 2011, Kobler told a meeting I attended: ‘Al-Maliki said that the only thing he wanted UNAMI to do in Iraq is to help shut down Camp Ashraf. And this is what we are going to do.’”

Maliki used UNAMI and UNHCR, the U.N.’s refugee agency, to transfer the 3,400 unarmed MEK members from Camp Ashraf to Camp Liberty, where they suffered deadly missile attacks and food and medical sieges. This action violated the residents’ status as “protected persons” under the Geneva Convention and ran counter to UNAMI’s mission in Iraq.

A picture of Mojahedin members in Ashraf being transferred from Camp Ashraf to Camp Liberty. #Iran #Iraq #Ashraf pic.twitter.com/VlJb4Voy

“The only opposition Kobler faced was from us, the mission staff,” wrote Elbasr, adding that she had never witnessed so much open opposition from colleagues toward their boss as she did in Iraq. She recalled one instance in which a colleague lost his temper at Kobler. “‘I am a lawyer and I am telling you: don’t sign the damn thing [memorandum of understanding],’ a senior colleague shouted at Kobler’s face in a desperate effort to stop him from making us do al-Maliki’s dirty work. We wanted him to focus on helping Iraq, but our call fell on deaf ears. The fate of Iraqis was sealed in New York.”

#iran @unrightswire #UN Can the world trust anything Martin Kobler says about the plight of Iranian refugees in #Iraq pic.twitter.com/1lEs4DlnK6

Kobler reported to Lynn Pasco, the American chief of the UN Political Department in New York. Elbasr explained that Pasco was using UNAMI to implement U.S. foreign policy and protect oil interests in the region. Al-Maliki must be appeased so that Exxon Mobile could continue to do business in Iraq. Therefore, Iraq’s political process and humanitarian concerns were of secondary concern.

UNAMI, with Martin Kobler as a leader, helped the US and “#Iran’s man in Baghdad” lead the country out of chaos, into tyranny and terrorism. Not long after he took up his position he said: “Al-Maliki said he wanted UNAMI help shut down Camp Ashraf. https://t.co/vdXmOAjEFX pic.twitter.com/OM14xu6Leh

In the end, al-Maliki successfully used the United Nations to transfer the MEK to a more dangerous location in Iraq and eventually ejected them from the country. Meanwhile, he tightened his grip on power with little resistance from the U.N. Security Council.

Two Faces of the U.N.

On the one hand, it claims to protect the people, help democratize societies, ensure respect for human rights, and many other noble causes I still believe in.”

On the other hand, she contrasted, the U.N. largely serves the world’s superpowers and their allies “in their respective ‘spheres of interest’ – a new euphemism for the former colonial concept of ‘spheres of influence.’ This often entails shielding criminal and corrupt Third World governments.”

Collaborating with the then Iraqi government, Nouri al-Maliki administration, the terrorist Quds Force was in charge to conduct the attack on Camp Ashraf in 2013https://t.co/GP4O7wBU54#MEK #Iran #FreeIran @USAdarFarsi pic.twitter.com/RcY6dCmEHx