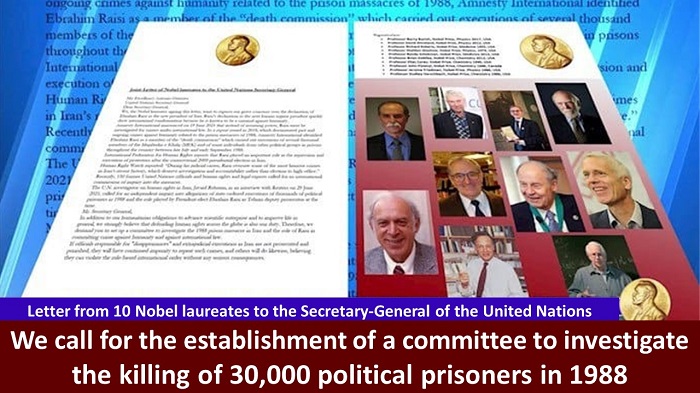 We call for the establishment of a committee to investigate the killing of prisoners in 1988.The National Council of Resistance of Iran (NCRI), and the People’s Mujahedin of Iran (PMOI / MEK Iran) reported that a letter from 10 Nobel laureates sent to the Secretary-General of the United Nations that expressing their deep concerns over the announcement of Ebrahim Raisi as the new President of the Iranian regime.

Ebrahim Raisi, the new president of the Iranian regime, is known as a criminal who committed crimes against humanity.

We call for the establishment of a committee to investigate the killing of 30,000 political prisoners in 1988 and for a leading role in the investigation of crimes against humanity.

We, the Nobel Prize winners who have signed this letter, would like to express our deep concern over the announcement of Ebrahim Raisi as the new President of the Iranian regime.

The announcement of a president as the next president of the Iranian regime quickly led to international condemnation because he was known as a criminal who committed crimes against humanity.

On June 19, 2021, Amnesty International announced that the new president should be prosecuted under international law instead of holding office.

Amnesty International, in a 2018 report documenting past and continuing crimes against humanity related to the 1977 prison massacre, identified Ebrahim Raisi as a member of the ‘Death Commission’ that executed several thousand MEK members and some Political prisoners from other groups in prisons across the country.

Recently, 150 former UN officials and human rights experts called for an international commission of inquiry into the 1988 massacre.

In an interview with Reuters on June 29, Javed Rehman, the UN Special Rapporteur on Iran, called for an independent inquiry into the 1988 massacre and the role of Ebrahim Raisi, then Tehran’s deputy prosecutor.

In addition to our humanitarian commitments to advancing scientific work and improving lives in general, we fully believe that it is our duty to defend human rights around the world. Therefore, we ask you to form a committee to investigate the 1988 massacre in Iran’s crimes against humanity.

If the authorities responsible for the ‘disappearance’ and illegal executions in Iran are not prosecuted and punished, they will continue to repeat such crimes, and others will do the same because they believe that they can build an international order based on Violate the rule without facing serious consequences.