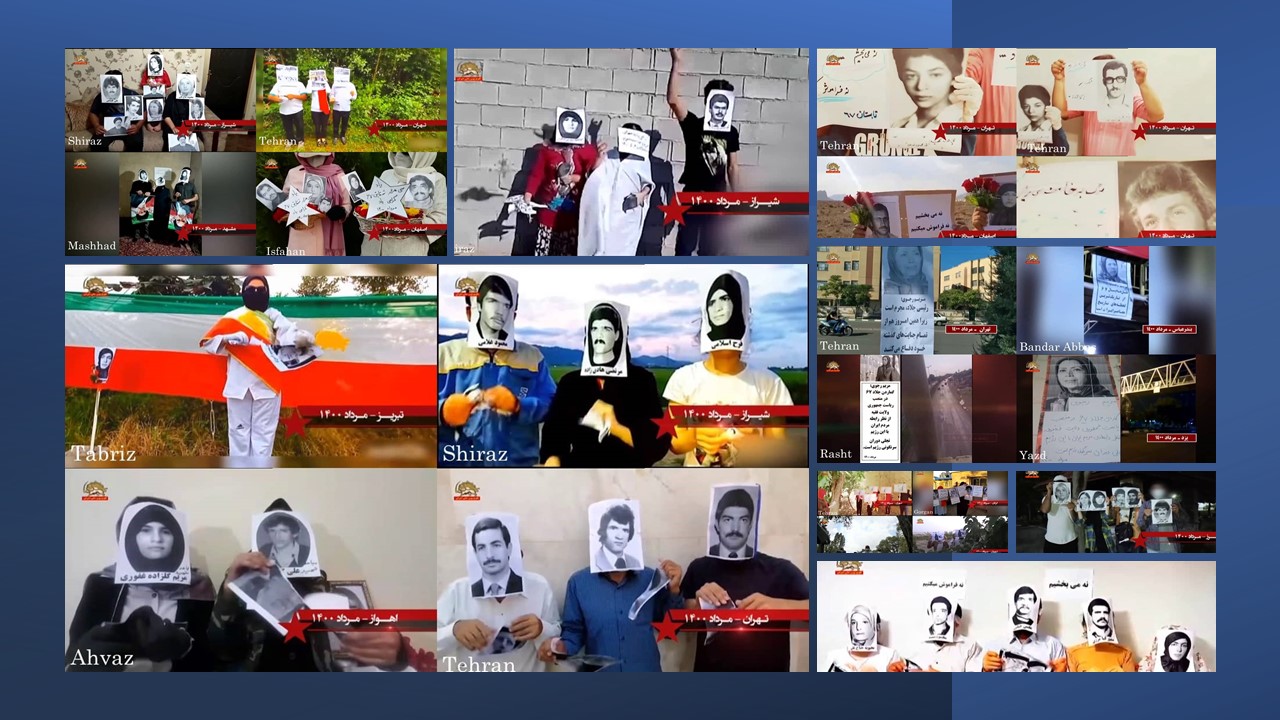 The National Council of Resistance of Iran (NCRI), and the People’s Mujahedin of Iran (PMOI / MEK Iran), reported that the defiant youths and MEK Supporters commemorating the 33rd Anniversary of the 1988 Massacre.

the 33rd Anniversary of the 1988 Massacre

On Thursday, July 29, 2021, on the thirty-third anniversary of the 1988 massacre of more than 30,000 political prisoners, more than 90% of whom were supporters and members of the People’s Mujahedin of Iran (PMOI / MEK Iran).

Ebrahim Raisi, known as the henchman of the massacre. He is scheduled to take office as the regime’s president next week.

The Resistance Units and supporters of the MEK reiterated the need for justice and prosecution of the perpetrators of this great crime.

(PMOI / MEK Iran) and (NCRI): Tehran and Gorgan – Activities of Resistance Units and MEK supporters in commemoration of the victims of the 1988 massacre – July 29, 2021.

The Defiant youth and MEK supporters held pictures of the victims of the 1988 massacre, who were executed because they chose to remain steadfast in their commitment to Iran’s freedom and refused to denounce the MEK.

MEK supporters, called for justice to be imposed on those responsible for the massacre. They also carried placards with slogans such as “The murderer [Ebrahim] Raisi must be prosecuted,”. “The criminal Raisi (should know), he will be held accountable,”. “we will neither forgive nor forget the 1988 massacre,”. “Death to Raisi, the henchman of 1988 massacre – hail to Rajavi.”

Resistance Units and Mujahedin-e Khalq supporters also hanged banners on overhead paths on major motorways in Tehran and other cities.

The banners quoted speeches by Mrs. Maryam Rajavi, the President-elect of The National Council of Resistance of Iran (NCRI), on the 1988 massacre, and Ebrahim Raisi’s role in that crime against humanity.

Resistance Units and MEK supporters carried out these activities in harsh-security conditions and while the State Security Force and the Basiji militias were on high alert. Local communities welcomed the activities with enthusiasm.

Activities of Resistance Units and MEK supporters in commemoration of the victims of the 1988 massacre – July 29, 2021.