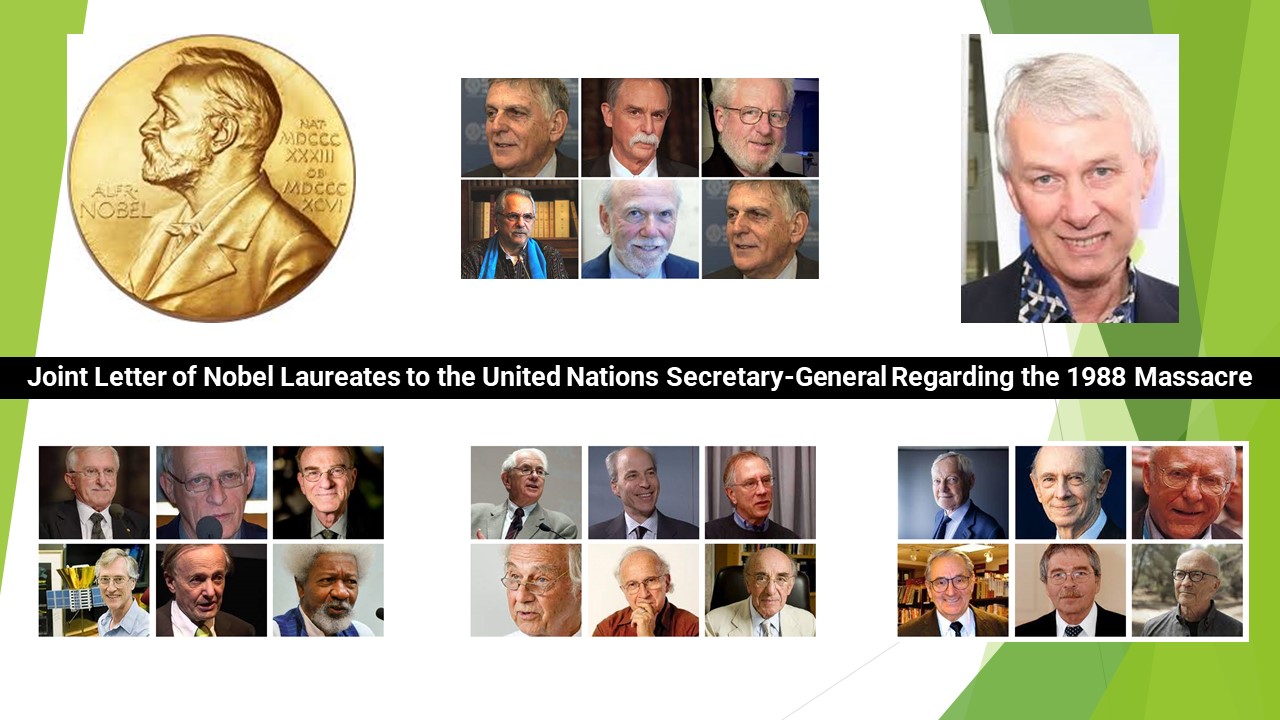 According to the Iranian opposition group The National Council of Resistance of Iran (NCRI), and the People’s Mujahedin of Iran (PMOI / MEK Iran), 25 Nobel laureates wrote to UN Secretary-General Antonio Guterres to express their support and condolences with the relatives and friends of those killed in Iran’s 1988 political prisoner massacre.

The UN to establish an international commission

The Nobel laureates “underscore the need for the United Nations to establish an international commission to investigate this major crime.”

On June 18, Ebrahim Raisi was ostensibly elected to the office, despite the fact that his candidacy was effectively unopposed and the election was boycotted by the vast majority of Iranians in protest.

Iranian authorities and official media admit that voter turnout was lower than in any previous presidential election, with the National Council of Resistance of Iran (NCRI) concluding that less than ten percent of the people actually voted.

The threat is heightened by Raisi’s track record of crimes against humanity. Over the course of three months in 1988, the massacre is claimed to have killed 30,000 political prisoners.

The MEK, which had been directly targeted by the fatwa that precipitated the killings, accounted for the great majority of those killed.

“Based on this fatwa, 30,000 political prisoners were executed over several weeks after being interrogated by the so-called Death Committee for two or three minutes. Those who refused to condemn the MEK were immediately sent to the execution hall. More than 90% of those executed were members and supporters of the MEK,” the letter read.

According to Amnesty International and other human rights organizations, “Ebrahim Raisi, the then-Deputy Prosecutor of Tehran, was a member of the three-member Death Committee in Tehran.”

In the prisons of Evin and Gohardasht, this committee killed thousands of MEK members as well as several hundred prisoners affiliated with other groups.”

Since the 2018 demonstrations, the supreme leader, Ali Khamenei, has repeatedly cautioned against MEK influence, breaking from past propaganda narratives that described the group as a cult with minimal organizational power and no public support.

The MEK staged yet another widespread uprising

Other officials quickly joined him in this endeavor, and their concerns were proven correct in November 2019, when the MEK staged yet another widespread uprising, this time even larger than the previous one.

Around this period, Khamenei had appointed Ebrahim Raisi as the head of the judiciary, drawing condemnation from a number of human rights organizations familiar with Raisi’s past. When Raisi oversaw months of torture in reaction to the second revolt, it came as no surprise to those groups.

Thousands of people were tortured after being arrested during the protests, perhaps increasing the death toll from gunshot events, which killed an estimated 1,500 peaceful protestors.

Genocide and crimes against humanity

“In the absence of international accountability, genocide and crimes against humanity continue in Iran,” the Nobel laureates wrote to the UN Secretary-General.

Continuing political killings and the murder of at least 1,500 young demonstrators in November 2019 are among them.

The regime’s efforts to keep the victims’ fates hidden from their families, to reduce the number of executions, and to conceal the victims’ MEK ties only add to the mullahs’ criminal record.”