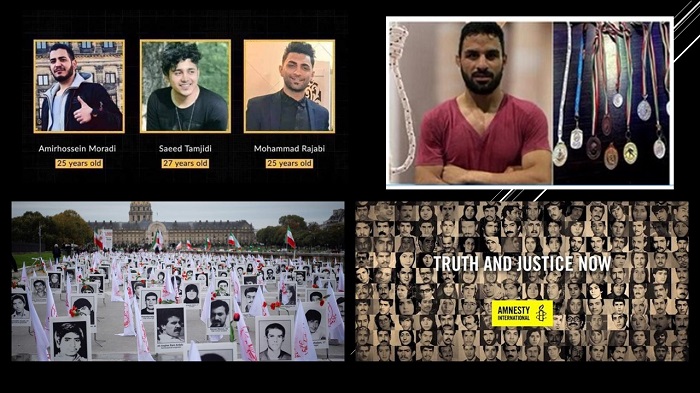 Recent reports from the country indicate that three Iranian prisoners currently sitting on death row have been threatened by authorities. They have told to be silent or else they will be executed.

It was reported that a judge, Mohammad Bara’e, visited the Greater Tehran Penitentiary recently for an inspection. During this visit, he spoke to several prisoners and he told three political prisoners to keep quiet about their situation. These three prisoners have been identified as Amir Hossein Moradi, Mohammad Rajabi, and Saied Tamjidi.

They were warned that if they spoke to anyone about the conditions that they are enduring in prison, they will be executed.

In July, their lawyer confirmed that the appeals did not work out favorably for his clients. He confirmed that the Supreme Court was upholding each of their death sentences. The lawyer also indicated that he has not been able to access the case files.

These three political prisoners were arrested for their participation in the November uprising last year.

Wall graffiti in Tehran, reads:
"In danger of execution,
Amir Hossein Moradi
Mohammad Rajabi
Saied Tamjidi"
Millions of people have been calling on #Iran to stop the execution of the young men who joined the nationwide protests in November.#اعدام_نکنید #StopExecutionsInIran pic.twitter.com/5ynMAF4Jqz

Abolghasem Salavati of Branch 15 of the Revolutionary Courts in Iran’s capital city issued the death sentences. Salavati’s name is well-known in the judicial world and he is known for issuing countless death sentences over numerous years. Furthermore, he was sanctioned at the end of last year by the United States Treasury Department for “censorship or other activities that prohibit, limit, or penalize the exercise of freedom of expression or assembly by citizens of Iran”.

Like many political prisoners in Iran, these men were subjected to violent physical and psychological torture.

#Iran: Guards Brutally Assault‌, Beat up Political Prisoners in Urmia Central Prison
Call to save the lives of political prisoners, and for a visit by an International Commission of Inquiry#HumanRights #StopExecutionsInIranhttps://t.co/UTbqHjcBnm

They were accused of being “riot leaders” and of sending videos of banks and petrol stations being set on fire to foreign media.

The trial started in January and was far from fair. Amnesty International described the trial as grossly unfair.

After his arrest, 25-year-old Moradi was held in a Ministry of Intelligence & Security (MOIS) detention center for a week. He then spent a month at the notorious Evin Prison in the Iranian capital where he underwent brutal torture and interrogations. He was told that he would receive medical treatment for the injuries interrogators inflicted upon him if he confessed. So he did. He was then forced to repeat these so-called confessions on state television.

7,000 men, women & children were arrested by authorities during the brutal repression of #IranProtests.
Hundreds have since been sentenced to prison terms & flogging, and several to the death penalty following grossly unfair trials. https://t.co/33WWRbdmvG

Mohammad Rajabi, 25-years-old, and Saeed Tamjidi, 27-years-old, were arrested at the end of December last year. They too were initially held in an MOIS detention center. And they were also severely tortured by interrogators.

The three men were all sentenced to between 11 and 16 years imprisonment and were given flogging sentences for a whole host of trumped-up charges. They, like many political prisoners, were not given access to a lawyer while their cases were being investigated.

The situation of political prisoners is extremely worrying. The main opposition to the Iranian regime, The People’s Mojahedin Organization of Iran (PMOI / MEK Iran), and the National Council of Resistance of Iran (NCRI) – has made repeated calls for an international fact-finding delegation to visit Iranian prisons to establish the extent of the regime’s human rights abuses.

Media outlets under the control of the Iranian regime denied that there had been a decision to execute the three prisoners. Many executions in Iran are carried out in secret. A recent example was the execution of Navis Afkari, wrestling champion, this has been done so that (PMOI / MEK Iran) supporter will loosen their support for the resistance due to the fear of being tortured and incarcerated just for their beliefs.

Mrs. Maryam Rajavi, The National Council of Resistance of Iran (NCRI) President-elect, has said that the United Nations Security Council, the UN Secretary-General, the High Commissioner on Human Rights, and the UN Human Rights Council, and any other concerned bodies should now be taking effective action to hold the regime accountable for its realm of terror.

It is imperative for the UNSC, UN High Commissioner for #HumanRights and the EU to take urgent action to save the lives of prisoners in #Iran. They should set up an international fact-finding mission to investigate the killings in November 2019 and visit Iranian prisons.